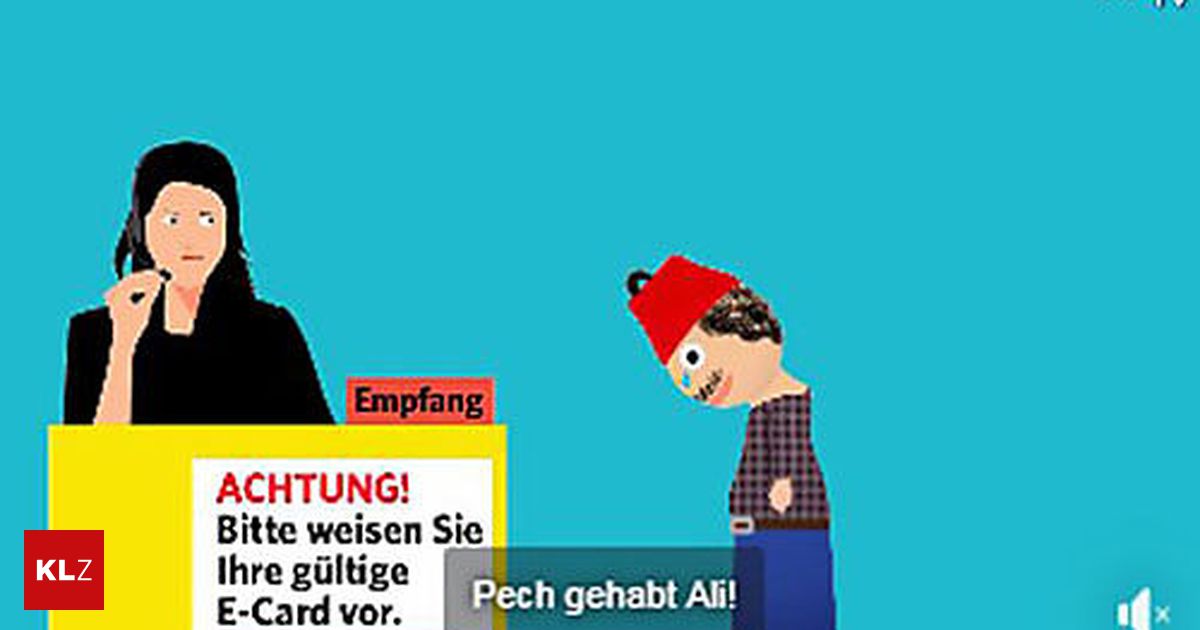 A video with which the FPÖ addresses the issue of social abuse using e-card as an example has caused an outrage during the day because it uses racist cliches. At night the FPÖ released the video from the network.

While the government invited Tuesday to a summit against network hate to the Federal Chancellery, the FPÖ posted a video on Facebook that serves for racist stereotypes. It illustrates the misuse of the electronic card by a "Ali" that has a fez. Even the president of the Free Heath club in Vienna, Johann Gudenus, shared the video on his page.

Said Ali wants to get into the film with the E-Card of his cousin Mustafa "whiten teeth", it is said. It fails, however, because the e-card will be equipped with a photo in the future. "Ali's bad luck is now saying goodbye to social abuse," reads the FPÖ comment on the video, which soon gained criticism from the competition on the network.

"Good that the FPÖ and minister Hartinger-Klein on the occasion of the summit against the" network hate "provide illustrative examples," he said about the NEOS.

At night the video was removed from the network. At the headquarters of the FPÖ, the emergency brake was brought at the request of the party leader. For the video said Christian Hafenecker "It was online through a communication problem without seeing me before". "I would not do it online". After getting knowledge of the short film, the clip retreated again from the network because it believed "it could be different". "When many people work, mistakes often happen," said the Secretary General.

The Councilor of State of Styrian ÖVP, Christopher Drexler, speaks of the "childish net populism" of the FPÖ, which is surprised. Drexler is also outraged because he presented the request for a photo on the electronic card during the summer of one year ago, for reasons other than the widespread abuse by FPÖ of foreigners (previously he had to take a photo identification with his e-card in the future, the electronic card will be enough). That the FPÖ released the video on the day of the summit against hate on the network, talk for themselves.

"FPÖ is not part of the solution, but the problem"

For SOS human beings, the video takes the top of the government against hatred in the network completely ad absurdum. "Those who hate the vote can not be part of the hate solution on the network, but they are part of the problem," he said Alexander Pollak, Spokesman of human SOS colleagues.

The racist racism that accompanies the FPÖ Facebook video on the subject of electronic letters now attracts a parliamentary question and a presentation of the opposition facts. The NEOS returns to the Public Prosecutor's Office of Vienna under suspicion of incitement, the mushroom list either in a petition to the social minister Beate Hartinger-Klein (FPÖ) about their participation in video information.

The presentation of the facts of NEOS is based on suspicion of incitement (§ 283 of the Criminal Code) and directs against the Parliamentary Club of the FPÖ, its president of the management club Johann Gudenus and against the own FPÖ and its leader of the party Heinz-Christian Strache . There is a suspicion that "a group of people defined according to criteria of ancestry, or of a regional or ethnic origin, as well as religion, has been abused so that it can scorn or shoot that group in public opinion," they say in the factual presentation .

A spokesman NEOS Justice Irmgard Griss said in a statement to the APA: "The same day the government is pursuing a summit against hatred on the network, the FPÖ publishes a racist and xenophobic video that is more than cynical. In a civilized state, the video shows that the photo hiding the Indexing of family assignment is not an "unlucky isolated case." And it was "completely incomprehensible because the ÖVP remained silent for some time." Leader ÖVP Sebastián Kurz Let the FPÖ "play people against each other and cause some groups to be negligible."

List of mushrooms in social networks Daniela HolzingeIn turn, in a parliamentary question, he became the Minister of Social Affairs, who is interviewed in the mentioned video. Among other things, Holzinger wants to know from the head of the department if, when he submitted his statement to FPÖ-TV, she knew in what context it should be used. "Did you know the script of the video?", So the question of the deputies.

In addition, the list of mushrooms also wants to know how many cases of abuse with the previous e-card are known to the ministry and what is the total damage caused by this misuse. Ask also if the social minister Beate Hartinger-Klein the video "from the form and / or content" has been discussed with the Chancellor Kurz or with the Federal Chancellery.

Meanwhile, the criticism of the FPÖ video came from the NGO SOS partner: "The Hetzvideo on the E-Card, which the Social Democrats Beate Hartinger-Klein today distributed, leads the government's leadership against Internet hate Absurdum: Who goes with I hate votes, it can not be part of the hate solution on the network, but it's part of the problem, "said SOS Alexander Pollak's human spokesman on a broadcast.