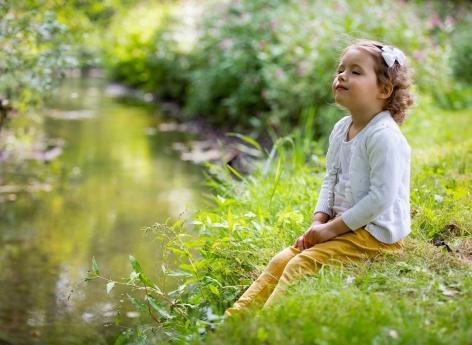 It's a fact: nowadays, children spend more and more time indoors, looking at a tablet or a television screen. The result is an increase in overweight and attention disorders.

What if, so that future adult children feel good about them and their heads, just connect them to nature? Numerous scientific studies have already shown that green spaces contribute to the intellectual and emotional development of the child, that contact with nature improves self-esteem, reduces stress and increases creativity.

A new study by the University of Aarhus, Denmark and published in the American magazine PNAS goes even further. According to the authors, children who grow up in a green environment are up to 55% less likely to develop mental disorders when they become adults.

To carry out their research, the study's authors used satellite data from 1985 to 2013 to identify green spaces close to childhood homes of more than 900,000 Danes. They then correlated this data with the risk that this population develops a different mental health disorder throughout adulthood. Other risk factors for mental illnesses such as socioeconomic status, family history and migration from rural to urban areas were considered.

"Our data are unique: we had the opportunity to use a large amount of data from Danish records, including residential location and disease diagnosis, and compare them with satellite images that reveal the extension of the green space, which surrounds each individual when it grows "says Kristine Engemann, the principal author of the study and the postdoctorate of the Department of Biosciences of the University of Aarhus.

Researchers know that, for example, noise, air pollution, infections and poor socio-economic conditions increase the risk of developing a mental disorder. On the other hand, other studies have shown that more green spaces in the local area create greater social cohesion and increase the levels of physical activity and cognitive development. Consequently, the researchers took into account all these factors, which can have an impact on the mental health of adults and children.

"With all of our data, we show that the risk of developing a mental disorder gradually decreased while we are surrounded by green spaces since birth to age 10. Green spaces throughout childhood are very important," says Kristine Engemann.

For the authors of the study, these results are a strong indication of a close relationship between the presence of green spaces, urban life and the development of mental disorders. "It is becoming increasingly evident that the natural environment plays a more important role for mental health than previously thought, and our study is important to help us better understand its importance in the general population." , says the researcher.

For Kristine Engemann, these results should encourage politicians to rethink urban planning to give more space to green spaces. This is even more essential because a large majority of the world population lives today in cities, she explains. "The relationship between mental health and access to green spaces should be more in mind in urban planning to ensure greener and healthier cities and improve the mental health of urban residents in the future," he added. Professor Jens-Christian Svenning, co-author of the study and researcher at the Department of Biosciences of the University of Aarhus.

Are you interested in this topic? Come to discuss in our forum.