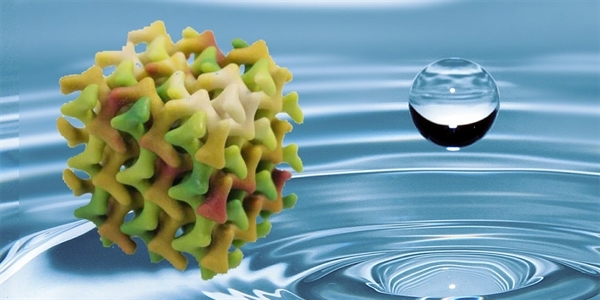 Making ice cubes is a simple process: you just have to take the plastic ice cube tray you find in most houses, fill it with water and place it in the freezer. The liquid will crystallize after a while and it will become ice.

If you can analyze the structure of the ice crystals, you will find the water molecules They are arranged in regular three-tier lattice structures. On the contrary, in water, the molecules are not organized, so they flow.

Do not freeze due to lipids

The first step of physicists and chemists headed by professors Raffael Mezzeng and Ehud Landau on the road to antifreeze was Synthesize a new lipid class (fat molecules) to form a "soft form of biological matter," which is called lipid mesophase. In this material, lipids are mounted and added spontaneously to form membranes that behave like common fat molecules. An essential aspect of the structure of these lipids is that it does not give water space to form ice crystals and their molecules remain disordered. Even at temperatures below freezing, water and lipids do not freeze, and scientists have checked with liquid helium at -263 ° C, only ten degrees above the "absolute zero".

They did that Even at this extremely low temperature, ice crystals were not formed – Water, according to his words, has acquired a "glassy" structure. A study of this unusual behavior of water in the lipid mesophase has recently been published in Nature Nanotechnology.

And who will benefit?

The experts in the matter report the relationship between lipids and waters as a key factor. They created a new class of lipids in the membranes of some bacteria. These microorganisms also produce a class of their own lipids that can naturally limit water in their interior space, allowing them to survive in a very cold environment. "What makes these lipids so complex is their synthesis and purification," says Ehud Landau, professor of chemistry at the University of Zurich. Explain why this is because Lipid molecules have two parts; Hydrophobic (water repellent) and hydrophilic (attract water). "This makes it very difficult to work with them," he says. Soft biological material formed from lipid membranes and water has a complex structure that minimizes contact with water with hydrophobic portions and maximizes its interface with hydrophilic portions.

What is it for? This is what Professor Mezzenga explains: "Our main objective was to provide researchers with a new tool that facilitated the study of molecular structures at low temperatures without ice crystals and would allow us to understand how the two main components of life, that is water and lipids, interact at extreme temperatures and geometric conditions. "