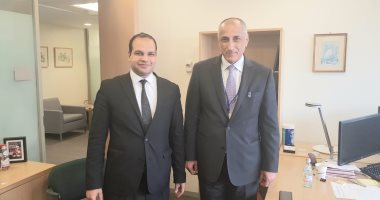 Tariq Amer, governor of the Central Bank of Egypt (CBE), said Friday that the volume of foreign exchange receipts received by the Egyptian economy since the liberalization of the exchange rate on November 3, 2016 has so far reached more than 150 billion dollars . Egypt.

The governor of the Central Bank of Egypt, in an interview with "the seventh day," will be published later, which includes the issuance of dollar bonds of about $ 18,000 million and direct flows to banks as a result of the sale of foreign currency at about $ 88,000 million and investment in treasury and stock exchange accounts Nearly $ 26,000 million, international loans received by Egypt and funds received by banks and the Saudi deposit about $ 3,000 million.

Tariq Amer, Governor of the Central Bank of Egypt, directs the Egyptian mission as Governor of Egypt to the IMF in the spring meetings of the International Monetary Fund and the World Bank in Washington, in the presence of several economic leaders and central bankers.

On Saturday, the International Monetary Fund (IMF) announced the 4th review of the program of economic reforms in Egypt, which highlighted several positive indicators on the performance of the Egyptian economy and expectations for the next fiscal year, and 5.9% predicted the Rate of growth of the economy of Egypt during the next fiscal year 2019-2020 versus 5.5% During the current fiscal year 2018 – 2019.