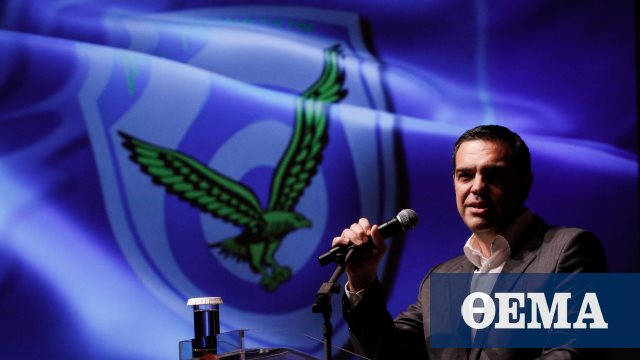 Your presence at a festive event Air Force Alexis Tsipras took advantage of to announce the single retrospective payment of 820 million euros to enthusiasts.

The Prime Minister gave the "present" to the act, making a greeting, stating the presentation of the modification corresponding to the storm retrospectives tomorrow at the House, as a symbolic movement, after eight years of memoranda.

"I am very happy to be with you here today. Among the people who dedicated their lives to the service of the country. Airlines of all generations. The members of the flocks that honor today. Executives that serve decades of denial.
The new generation of brochures. And the next, the Icarians wait in turn. This is truly miraculous.
Respect for the history of life is, in addition, the driving force, the driver of the future. This is the collective principle that has followed our people, whenever it has faced difficulties and difficulties. And he managed to face them and go higher, overtaking them. At this point we are today. With Greece leaving behind a tough time. And now, in the first steps of its reconstruction, we decided to make bold steps. Take action To move away from misery and inertia.

We dare to deal with the problems, with the pendulums that keep us fixed. Not only to recover the country after 8 years of memories and annihilations. But to be able to accelerate and take off. Why can he take off? But also, better than anyone, you know, to take off, boldness is needed.

And in politics, it brings courage. Reflections black and good. Immediate and drastic decisions. And in regard to someone in charge of the country, decisions that directly improve the lives of people injured during all these years. And you and your men and women who serve your country with determination and self-reliance, from the limits of our country, during the difficult times of the crisis, have done wrong in the terms of your salary. But for a moment you did not suffer the flag, for a moment you did not do the definitive task, in spite of these injustices. And that is why his attitude gave us a deep gratitude. But also our concern to be among the first to leave the country with the Memoranda, we will try to soften the wounds and restore some of these injustices.

The first step is tomorrow at home. With a clear symbolism. The first positive budgetary measure that comes to Parliament in the vote after the end of the memorandum deals with the restoration of injustice suffered by the people who work in this place. University masters, judicial officers, doctors, security forces, firefighters. And, of course, those and those who daily protect territorial integrity and defend the sovereign rights of the country. The men and women of the Greek Army, the Navy and the Air Force.

For that reason, we come tomorrow by law, with the return of 820 million retrospective payments made in the memorandum years and that will be paid with respect to the uniforms as a whole until mid-December of this year. As a sign of respect and recognition in the work of each and every one.

And leave me a comment here. It is our option to proceed to restore this injustice. This is not about enforcing judicial decisions. Because you know very well that there were other relevant court decisions in previous years, which were not adopted by previous governments. Consequently, it is a question of political will and not of legal commitment.

And that very good will, to gradually eliminate the great injustices that occurred during the time of the memoranda, we tested in practice. Why is the economy recovering? Because recovery creates the first fiscal margin for the first time and why we leave the memoranda and we have the capacity and sovereignty to choose how we will use the financial space we achieve,
through the good management of public finances. Of cutting waste, poor management. From the fight against tax wealth and the conflict with the state of interbreeding and corruption.

That is our decision. This is our commitment. Justice to return to this place. And he'll come back

Ladies and gentlemen,
"Men and women of the Air Force, in addition to the struggles of the economy, we must never forget that we are obliged to always have the most read and human resources ready for use and real fighting, precisely because we want them to be avoided.
But in order to avoid them safely, we must live in a period of multiple tensions and challenges in our region.

For this reason, we carry out the strategic election for three years, that Greece is no longer a pariah of the international community and an observer of evolution. And to recover the prestige and role he deserves. An evolving protagonist of the Balkans.
Polo of stability and security for the wider region. Factory leader in cooperation and stability in the Mediterranean Sea.

Not a fearful country and locked in its bark. But he is a protagonist in evolution, a leading force in his region, a region that is generally characterized by instability and, often, by conflicts.

Then I know we could never implement such a strategy and recover such an important role in the region without having the Armed Forces with great respect, professionalism, a sense of democratic and patriotic duty.

But I would like to point out: Greece has a strong deterrent power, with the sole purpose of maintaining stability and security.
It is not in conflict. Respect and work for excellent neighborhood relationships with neighboring countries. It does not threaten anyone, but it is not threatened by anyone.

The role of the air force is crucial. With the ability, sobriety – I repeat – the professionalism that our pilots face in times of exceptionally difficult situations. Address all the challenges in a timely and effective way, helping to reduce tensions. And I want all the Greeks and all the Greeks to thank you for that. I know how hard it is and what are the skills you need because I have lived. And I want to thank heart for what it offers in our native land and express the immense gratitude of the Greek State.

But I also want to dedicate myself to something that is an integral part of the mission you are doing. Your offer to the community.
Your contribution to the field of patient dispatch. And it's worth knowing that only this year with advance transfer within the Air Force, 914 people were saved in remote areas of the country.

But I also have a decisive role in the areas of air monitoring and firefighting. And everyone knows in this country, in such difficult circumstances and how much to deny is also doing their duty in this area as well. And finally, in search and rescue, where this year, with the help of the Air Force in collaboration with other bodies of the Security Corps and the Armed Forces, we save 175 human beings.

Ladies and gentlemen,
I would like to thank the highly honorable proposal to ask me to go to Aviation Day. I want to assure each and every one that the State recognizes its work and its offer and will always be at its side, with honor and respect for the mission they have undertaken to defend the country. Thank you ".