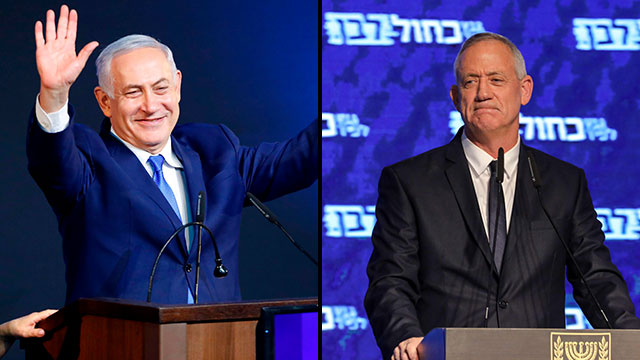 Leaving behind the pathetic electoral campaign and its rhetoric, the proclamations of the Blue and White Party that will not join a government of Netanyahu, if fulfilled, would be the worst side of the country.

So many election promises have been broken, but this must be.

Without a unit Israel will have another religious government on the right. When the last government was formed, the parties that refused to join were warned that the national religious coalition would be unable to rule and be sentenced to failure. This has been shown to be bad.

Netanyahu's deputy office allocated ample funds to religious institutions, were extremely damaging to Israel's relations with American Jews and increased inequality between secular society and the orthodox community, extending the exemptions of military service for Torah scholars. The society is more fractured under the leadership of Netanyahu, but the worst of all is the path that the country has begun to lead to a unipersonal and binational future.

Most of these ills can be stopped. It is possible to decide, for example, that any construction in the settlements will be limited to large blocks and does not include isolated communities.

It is also possible to reimburse a health center for Orthodox families in amounts similar to those signed by Netanyahu Finance Minister before being Prime Minister. The ultra-Orthodox could serve in the army, what their secular brothers do.

The coalitions of the last unit were formed with great efforts in 1984, 2002 and 2013, and these cabinets could have significant achievements.

In 1984, the government addressed fugitive inflation, bringing stability to the economy. In 2002, the unit government avoided the economic disaster with Netanyahu as finance minister. This would not be possible in a close coalition with ultra-Orthodox parties. In 2013, both left and right joined forces to agree on a scheme for peace talks with the Palestinians.

The center and the left parties warn about scenarios of the final judgment that surely will happen if there is another coalition of right and religion in power. Exaggerate in their terrible predictions, but if only a small fraction of them become true, these parties should strive for a unit government.

What's more important? Keep campaign promises or save the country?

Although unit governments do not meet their full conditions, they still carry the country ahead while they last.

The legend that narrow coalitions are more in line with the will of the voter is false. The small factions exert pressure for their own benefit and execute policies that most do not support.

National interest is much more important than chronic hostility and the promises made in the campaign's path. So, please, grows. A unit government is indispensable.