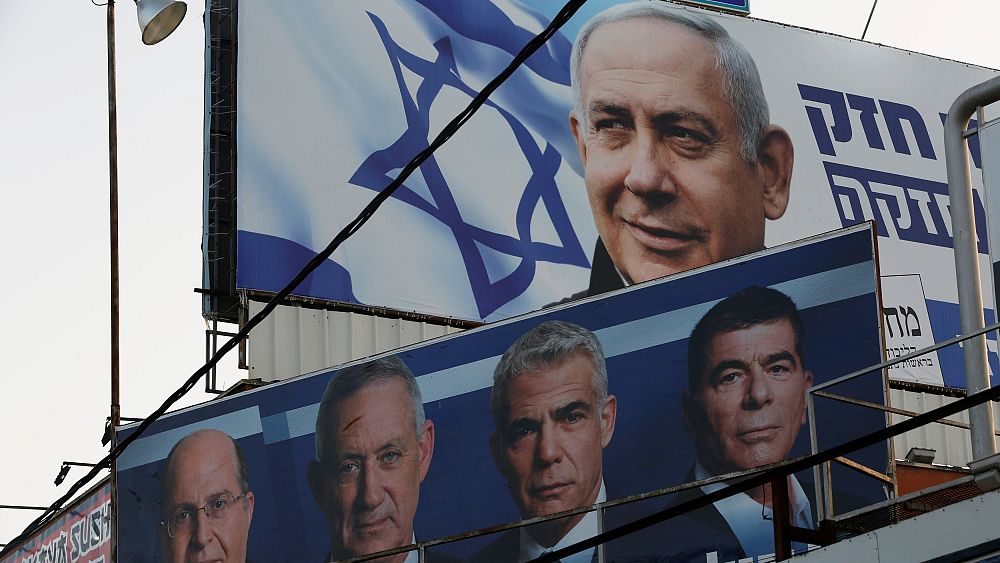 Benjamin Netanyahu's Likud party leader is getting closer and closer to a fifth term.

Although Benny Gantz's centrist rival is about to have 97% of the votes counted, Netanyahu is in a strong position to form a coalition government with the right-wing parties that support him.

The final results are scheduled on Friday, although the provisional ones showed that 65 of the Knesset of 120 seats would go to the right block led by Netanyahu and 55 seats to the center-left alliance.

Both candidates claimed victory as the first results of the vote were announced.

President Donald Trump told reporters on Wednesday that "re-election" of Netanyahu after a national vote was a "good sign for peace."

During the election campaign, Netanyahu highlighted its close relationship with Trump, who enchanted the Israelis and infuriated the Palestinians by recognizing Jerusalem as the capital of Israel in 2017 and moving the United States embassy to the holy city in May 2018.

Previously, the exit polls of Israeli media have the prime minister's level at best, and some predict that Gantz had the advantage.

Two of the three exit polls saw Gantz taking more seats than Netanyahu's Likud conservative. A third survey predicted that the two sides would be tied.

However, two inquiries predicted that the right parties would gather more than 60 of the 120 parliamentary seats, forming a block that Netanyahu could order to form the next coalition government – a vital factor that led him to achieve a fifth record.

Both candidates took Twitter to claim the victory after the release polls were released.

"We have won! The Israeli public had their say!" said the blue and white centrist of Gantz.

"The right-wing block led by Likud has gained a clear victory," said Netanyahu. "This morning I will begin to form a right government with our natural partner."

The voting centers close at 21:00 CET. But the winner may not be announced immediately, as it will depend a lot on the coalition's construction.

General Benny Gantz had several assets in this electoral race. First, he is ten years younger than his 69-year-old rival.

His military reputation as an ancient parachutist and chief of staff of the Israeli army is likely to reassure voters concerned about the security of the country, an area where the law normally enjoys more confidence.

However, while Gantz fought with many military battles, he is a newcomer when it comes to politics, especially in comparison with veteran politician Netanyahu.

Netanyahu, in the consecutive power since 2009, is fighting for its political survival. He faces a possible accusation in three cases of corruption, in which the head of the right-wing party Likud denied any crime.

If he wins, Netanyahu will become the prime minister with more antiquity in the 71-year history of Israel this summer.

Netanyahu's strategy for this election was to defeat votes from ultra-nationalist rivals, pushing their policies and rhetoric to the right. On Sunday, he promised to annex Jewish settlements in the occupied West Bank, he would win the elections.

The prime minister also secured an agreement with an extreme right party faithful to the policies of the late anti-Arab rabbi, Meir Kahane. Faced with criticism of its alliance with an openly racist entity, Netanyahu defended the agreement as a way to improve its chances of forming a government-led coalition led by its Likud party.

Although this strategy runs the risk of alienating right-wing voters, Netanyahu may rely on the electoral system: no party has won most of the seats since Israel's first election in 1949, so the creation of coalitions will be essential.

Construction of coalitions and manufacture of kings

Netanyahu will probably seek a coalition with ultra-nationalist and orthodox Jews.

Gantz, who directs the Blue and White centrist party, will probably win the support of left and center parties, but polls predict that it will not match a ruling majority in parliament.

In Israeli politics, a "unit government" can never be ruled out if the way to a coalition directed to the right or center-left is difficult, although Gantz pledged not to serve with Netanyahu.

In Haaretz's words, the national newspaper of Israel, Netanyahu's long-standing political career is due to the fact that "Israelis are like smokers who really want to resign, but who believe they can not work without their constant dose of nicotine."

According to political advisor Dahlia Scheindlin, Netanyahu's relationship with parties that sit more to the right could have strong repercussions for those living in the West Bank:

"On the ground, what we see are various forms of annex de facto, not formally, nor in terms of declaring it, but what you see is in recent years Israeli settlements are expanding through the construction of neighborhoods and infrastructure, even without establishing new settlements … What right parties are saying is that we can give it a name, formalize it. I see growing pressure to extend Israeli law more formally and make statements about annexation. All of the West Bank, we could see bills that were in the previous Knesset, bills such as an annex agreement, such as area C, which is 60% of the West Bank.