Olimpia and Reyer, continue the trip to two at the top of the classification 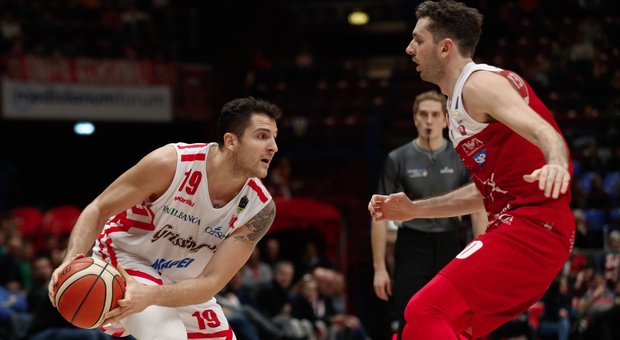 Calls from Venice, answers from Milan. Olimpia beats Reggio Emilia and is placed at the top of the Reyer, privateer yesterday in Sassari. Next Sunday, in Taliercio, the super challenge between the two current unconquered championships. Behind the two footsteps, there is Cremona that persists at Pistoia, the only team that remains in zero points. Sal always above Brindisi that passes in Turin with a great choral test, Avellino expels to Varese and relaunches, Bologna returns to the victory. Tomorrow closes Pesaro against Trieste.

FIAT TORINO – HAPPY CASA BRINDISI 66-72
Choral test by the Pugliese team that wins in the Sail Shovel and obtains the third consecutive victory. Turin, revolutionized during the week because of the numerous injuries and new grafts, keeps the time it can, but the end is the whole area of ​​Brindisi. After the 13th of the first quarter, the race takes place. The banks and an inspired Moraschini give strength to the guests that reach the maximum advantage 19-28. Turin falls: from 31-32 to 20. Clark signs the triple from 33-41 to 23. The Auxilium has a break and surpasses, 51-48, with the basket and free Amouba. Brindisi does not give up: 51-55 the 32. In the last two minutes he continues the balance, Chappell puts the triple of 59-64, Moraschini of 64-69. No more time for Turin, Toast wins with merit.

AX OLIMPIA MILAN – GRISSIN BON REGGIO EMILIA 100-75
Milan without Gudaitis and Nedovic, send Della Valle and Fontecchio in quintet. Reggio puts his nose forward in the first two minutes, but Milan makes it clear he does not want to play: 15-10, and then 18-12 with triple of James. The first quarter ends from 23 to 15. Ledo is a factor for Reggio, scores eight points in a row and the impacts of Reggio on the 27th to 14. Mussini takes the lead in 34-37. Milan played 44-43. Like other times, the Ax decides to accelerate. James places three triples in a row and 13 is 57-46. Reggio disappears from the field, Milan flies 65-48, then 72-50 and closes the third quarter 75-56 with an impressive 31-13. The last quarter only serves to correct the score. 85-63 at 35, 100-75 in the final with five men in doubles, 43 percent between three points and 39 rebounds against 30.

SEGAFREDO BOLOGNA – OCTUBRE ROJO CANTU & # 39; 90 -81
Cantù started to move forward, 0-9, and 4-14 in fifth thanks to Jefferson who scored 11 personal points. Bologna is disoriented, guests fly 6-19. Aradori throws the load, 15-22, but Cantù closes the first quarter ahead 17-26. In three minutes the Virtus returns: 25-28 and the immediate waiting time. Kravic dominates and gives the first domestic advantage: 32-29 on the 15th. At rest along Segafredo he has a flash and closes the breakthrough 47-42. Ms. Baye scored four points in a row, followed by Aradori and Punter. Virtus tries to escape, from 66 to 56 to 27, thanks to a technical foul whistle in Mitchell. Cantù is closer to 66-60, but the usual Kravic and Aradori, in the end 26 points for both, pushed him back: 77-67 to 34. Cantù no longer has the strength to return and Bologna closes 90-81.

OPENJOBMATIS VARESE – SIDIGAS AVELLINO 79-83
Two healthy teams for a game already important to look up. Avramovic and Cole inflame the start, 11 equals the fifth. Avellino has a flicker with Filloy's triples, from 14 to 19, but Varese does not give up. The first quarter closes 19-22. Balance also in the second quarter. 30-27 Varese, then overtaking Avellino from 30-33 to 16. Cole's results from all sides, but Varese has a better distribution of points and ends 43-42. Parity up to 50, then Varese takes advantage of Avellino's negative moment to try to escape: 61-54 to 28. Avellino is not there, the third break starts again from 64-62. The game lives on the thread until the last ten minutes. 71 equal to 33, 75-76 to 36. Filloy and Caleb Green, undoubtedly their colorless test, sign the win. Finished 79-83, Masnago loses his unbeaten, Avellino increases again

ORIORA PISTOIA – VANOLI CREMONA 73-90
Pistoia continues to show the usual difficulties, especially in attack. Cremona already before the fifth, 11-17, in the first break is 17-20. Only three players scored for the hosts. The encounter is not beautiful. Auda gives the lead to Pistoia, 25-22, but Vanoli is well. As of the day 16, Ricci and Demps test the extension of the guest, 35-42, after 39-46 the day 22. Without doing anything transcendental, Cremona gradually prolongs. Ricci found the triple of 42-54 the 26, the advantage remains almost unchanged in the third rest, 54-64, with three free Travis Diener consecutive. With the force of despair, Pistoia tries to reopen it, 61-67 at 34. The last breath, Cremona reaffirms the claws with Ruzzier and Diener, 63-76 to 37. He finishes 73-90 with the triples of Ricci (27 points with 5/8 of the bow). Home supporters, OriOra remains at zero points, and Ramagli's position on the bench becomes increasingly complicated. Last update: 23:12 © PLAYED RESERVED