"I do not know where the bus is?" 70 passengers who pushed the transit board to the mouth 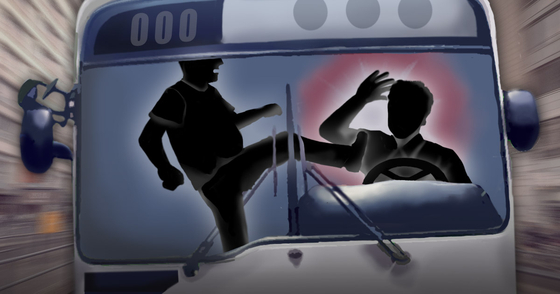 Assault to the driver of the bus. The previous image has no relevance to the content of the article. [연합뉴스]

A 70-year-old passenger with a traffic card in the mouth of a local bus driver was sentenced to probation.

The 11th department of criminal justice of the District Court of Gwangju announced on November 11 that A (73), who was charged with violating a law related to a specific crime punishable by the crime (assault on the driver, etc.), sentenced him to two years of probation

The court said that "I think that there was a risk of a serious accident that caused human and property damage, and not just the victim, but also other passengers, seemed to have considerable anxiety." Fortunately, the accident has not caused another accident, "he said.

On September 9, at 8 o'clock, he knocked out Mr. Knight B's (56) knife once in the city bus passing Unam-dong, Buk-gu, Buk-gu, Gyeongsang Province, was accused of assaulting Mr. B I do not try to assault you.

Mr. A asked Mr B for his route to the Gwangsan-gu apartment, but he assaulted him because he replied that he did not know it.

"He was assaulted by pushing Mr B's face, but he did not place a traffic card in the mouth or grabbed his neck," one denied in the trial. The court, however, acknowledged the crime based on closed circuit television records (CCTV).