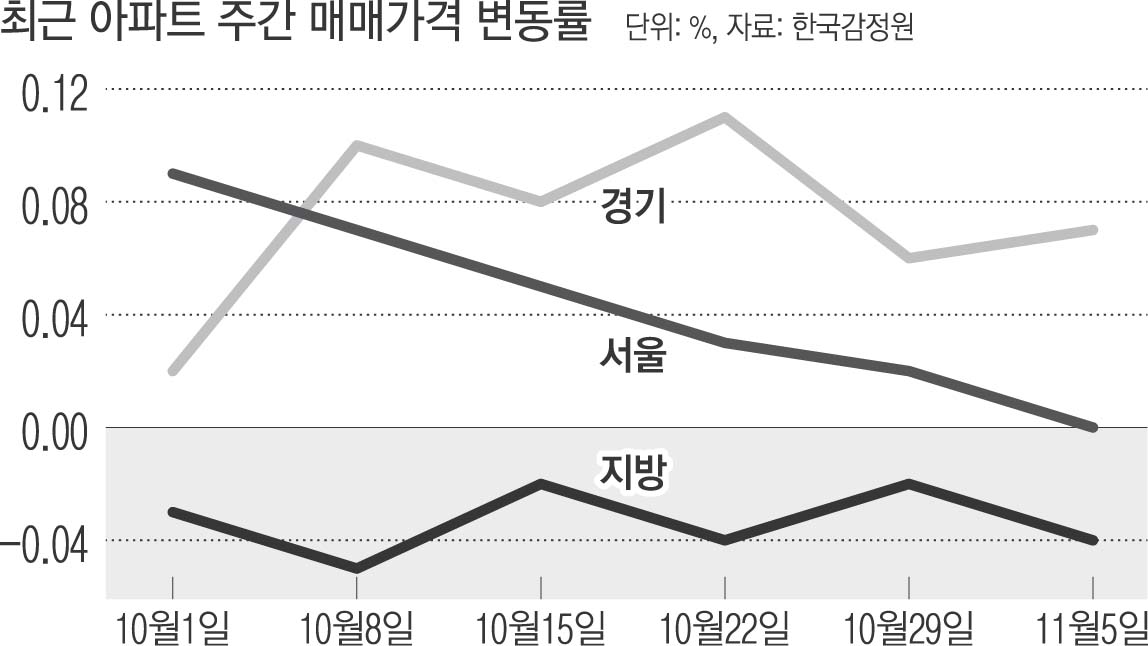 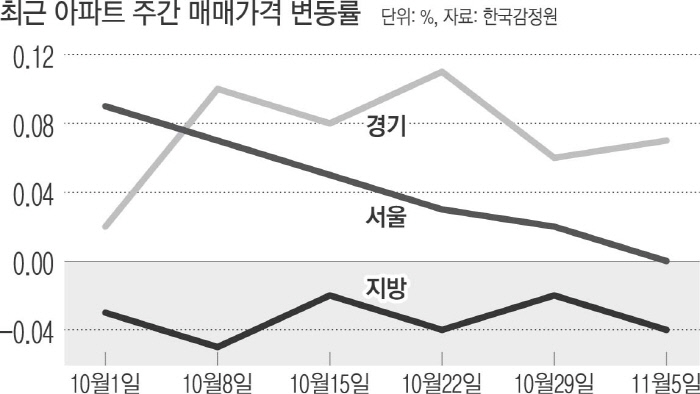 The rise in prices for apartments in Seoul stopped in one and a half years. With the "9 · 13 real estate measures" and various signs of economic downturn, the recovered housing complexes seemed to decline.

According to the Korean Rating Center on August 8, the value of the Seoul apartment was registered at 0% 5. The rise in prices for apartments in Seoul fell only 60 weeks after the second week of September last year. Prices for Seoul apartments, which rose sharply to 0.47% on September 3, are steadily declining since September 13.

Gangnam District 3, which was considered the epicenter of the rise in house prices, such as Seocho, Songpa and Gangnam, fell three consecutive weeks. The price of the Songpa-gu apartment, which fell 0.05 percent last week, dropped 0.1 percent and the price dropped twice. Seocho-gu and Gangnam-gu fell 0.07%. Gangdong-gu, which rose 0.05 percent last week, went to a stock market in 17 weeks.

"Housing prices in Seoul have once again increased levels since September 13, which included measures such as the strengthening of taxes such as the comprehensive real estate tax, the reduction of the landlord's profits and the regulation of loans," said Lee. "Reconstruction projects, houses at high prices, The price is falling mainly in areas where tax burden, such as the area that has grown, is increasing."

A close agency official said: "If you have not resided for more than two years from 2020, you will not receive a special deduction for long-term capital gains tax. Most of the properties on the market today are not enough to cover this Condition, "he said." There are no buyers who are willing to invest because the stock market anxiety and the possibility of interest rate increases worsen. "

Unlike Seoul floor prices, Gyeonggi and Incheon rose 0.07% and 0.06%, respectively.

Copper (1.02 percent), which was subject to land shortages and Dongkwang-dong, Goyang City (0.42 percent), which had a favorable development such as Daegok Sosa Line and Gwangseong Express Railway (GTX-A) . In Incheon, the influence of Bupyeong-gu (0.18%), where the complex demand near the subway increased, seemed to have played an important role.

Seoul apartment prices dropped 0.03 percent, decreasing for the second consecutive week at the bottom of a decrease of the previous week (-0.01 percent).