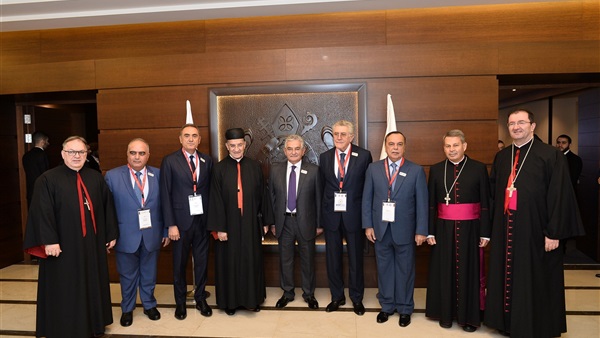 The Patriarch of Antioch, the Maronite patriarch Cardinal Mar Bishara Boutros-Raya, the patriarch of Antioquia Maronita, inaugurated the first conference of the "Economic Society of Bkerke" at the Patriarchal Palace of Bkerke at the invitation of the Patriarchal International Foundation for Comprehensive Development , in the presence of several bishops and economic and social events of Lebanon and other countries. Proliferation, official and political bodies, priests, monks and nuns.

The conference aims to link Christian economic capabilities in Lebanon with those of countries that proliferate in real development and support a series of vital projects to serve the community.

Al-Ra said during his speech this morning, published by the official website of the Patriarchate, that we are here to learn more about and strengthen the ties between Lebanon and the Patriarchal Church, on the one hand, and their children scattered in general and the Maronites, especially in the different countries of proliferation. In cedar embedded in the Lebanese mountain with its branches spreading horizontally in each direction. There is no live onix without branches, no branches without alarm. This conference, which we want annually, aims to preserve this vital organic connection and the mutual requirements.

"We are here to think about the future of our young people, who graduate in hundreds of Lebanese universities annually and find no place in their homeland to stimulate their abilities, realize their dreams and assume their responsibilities in our society and in our homeland The economic, social and life situation is diminishing day after day because of the political practice that is detrimental to the life of the State. One-third of our people are below the poverty line, and a third of our girls and living forces They are unemployed. The Church can only redouble their efforts. The Maronite Patriarchal Synod held between 2003 and 2006 devoted two texts to social and economic issues.

Continued Pastor: in our meeting, our church begins with three constants: solidarity, social justice and promotion. Adopt a social policy aimed at guaranteeing the basic rights of its citizens: the right to build a family, the right to housing, the right to work, the right to health and medicine, and the right to education and culture; works to guarantee these rights in all its institutions and To refrain from requiring the first responsible State to provide these rights and perform its functions. The Church will not hesitate to make more efforts and sacrifices by virtue of its mission, but needs the support of the good and the private sector, although neither the Church nor the private sector replaces, but rather help the State. It was the duty of the State to help financial institutions financially.

"After analyzing the current economic situation, our Church has identified the deviation sites," he said. "We asked for the return to ethical standards in the economic and social life and the need to modify the tax system, and deepened the analysis of monetary policy and the issue of public debt, and stressed the educational system and the right to remain at home, and the importance of cohesion with the communities of proliferation. It demanded a productive society with a policy of integral support to the productive activities, guaranteeing his protection, the fight against the corruption and the structural and sectorial reform.

"These are the pictures that invite us to think together about how to preserve our presence in Lebanon to preserve it with its special characteristics and characteristics that have made it a sign of hope in this Mashreq and thus improve our potential in this way," he concluded.