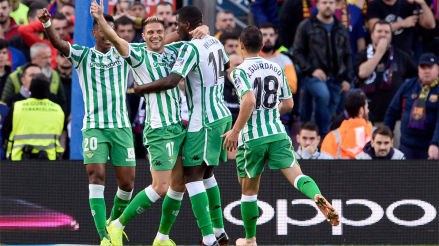 LIVE | LIVE | Barcelona, With the Argentine Leo Messi already recovered, he receives the Sunday Real Betis (10:15 a.m. Peruvian time) with the objective of consolidating the leadership of LaLiga Santander before stopping the competition because of the commitments of the national teams.

Especially when Valverde can not count for this encounter with Brazilian Philippe Coutinho, who will be between two or three weeks in the dry dock with a muscle injury and left Ousmane Dembélé out of the squadron. The French council did not appear in training last Thursday claiming a gastroenteritis and yesterday he also exercised his teammates.

In his place could have the opportunity to the Brazilian Malcom Felipe de Oliveira, author of the azulgrana goal against Inter Milan (1-1) and could form a triple attacker with Leo Messi and Luis Suárez.

The rest of the eleven will surely be the usual with the only exception of the possible entry of the Chilean Arturo Vidal to strengthen the nucleus and give rest to the Croatian Ivan Rakitic.

Real Betis, on the other hand, arrives Barcelona Ready to recover the league flight, where his fourteenth place contrasts with his good career in the Europa League, where he is unbeaten and leads his group and with the illusion of giving the bell twenty years after his last victory at the Camp Nou, 1 -3 in 1997-98 and with the legendary Luis Aragones on his bench.

With information from EFE