The Karolyi castle attracted the attention of Hollywood producers! 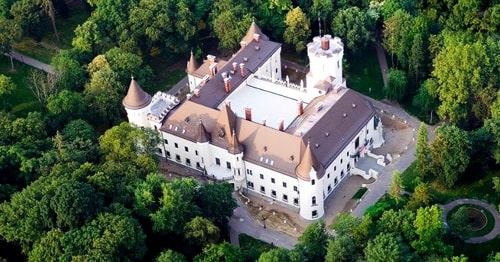 Karolyi Castle in Carei City attracted the attention of Hollywood producers! Since the fort was discovered by Americans, tourism flourishes in the area. How did your beauty come to Hollywood? After a shooting team shed a movie, in February, the city began to attract 50,000 annual tourists. The American production "The Princess Switch" features the protagonist Vanessa Hudgens. The Christmas comedy can be seen in the movies in the United States the next week. The film was filmed in and out of the castle for a month.

Full of joy because now one of the treasures of Romania is increasingly being seen is the director of the tourism promotion center. "They found this as a small pearl, a jewel in which the production houses did not have news and used this novelty. They renovated some of the halls, but they used the architecture of the castle and the exhibitions here", Explained Dragos Georgescu.

In addition, a possible reason why Karolyi Castle attracts more and more tourists could be its renovation, which cost 5 million euros, money that is part of the European funds. Its arrangement was made in 2012, and since that year it is promoted on all occasions by the tourist fairs of the country and even abroad.

right history.ro, the history of his name belongs to the Groff family and, over time, he was also a military garrison, a TBV sanatorium and a zootechnical institute. An architect described the style of the castle as a romantic eclectic. "In its present form, the castle of Karolyi seemed the castles of the Loire valley. A castle built in an eclectic romantic style with many special styles"said Hago Attila Nandor.