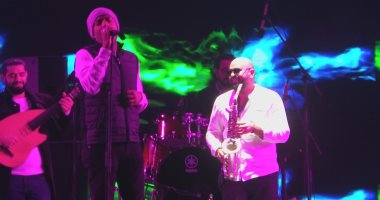 "Darcioni, Drexioni, Dabriage, The Dabriage, The Prince of Nights, Pomegranate," in the words of one of his most famous songs, the band from Black Tama listened to the audience during his great concert at Park Park in Rehab.

Black Tima presented a musical mix between her first album, "Bahar" and extracts from her latest album "Ghawi Bani Adamin", including "Ahram Republic News", "Zuma" and "Prince Nights". Which combines for the first time the 6 The biggest bands in Egypt, with the participation of a mandatory track, Sharmofers, the center of the country and Disco and Discotheque of Egypt.

Black Tima has just recorded his new album, three years after his latest album "Gawa Bani Adamin", with five songs based on reviving a combination of the most famous works of the Nubian patrimony in a modern way.