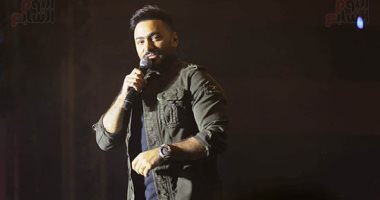 Tamer Hosny starred in one of Cairo's new nights to celebrate the success of his latest album, "Aish Beshougak," at Cairo Festival City Square with thousands of fans.

EThe concert was performed by Ahmed Zaher, who noted that Tamer, whatever was read, is always successful with his audience, where he has achieved the highest revenues in the film Al-Suit in the history of cinema, as well as the success of the album "Live your passion" .

Tamer was accompanied by his brother Hosam Hosni and Saad Ali on the stage. He sang the song "Aish Beshoukak" among the joys and applause of thousands of fans, as he was eager to greet the audience and organizers of the ceremony that allowed him to celebrate successfully.

He thanked his friend Ahmed Zaher and completed the concert with a large number of songs from the album, which he starred throughout his career, including "Every Time", "Ya Ana Mafish", "Telefoni Ren", "Kfayak excuses" "100 Wosh "… and many others, including many comments accompanied by a series of dancers Directed by Maisa Nasr.

The ceremony was organized by the trio "Islam Arafa, Muhi and Omar Al Ashmouni", and supervised by Wael Al Masri. "The concert was the largest theater created by Tamer Fawzi and the installation of light and light terraces.