PHOTO Slovaks returned to the streets: eight cities called for a decent Slovakia 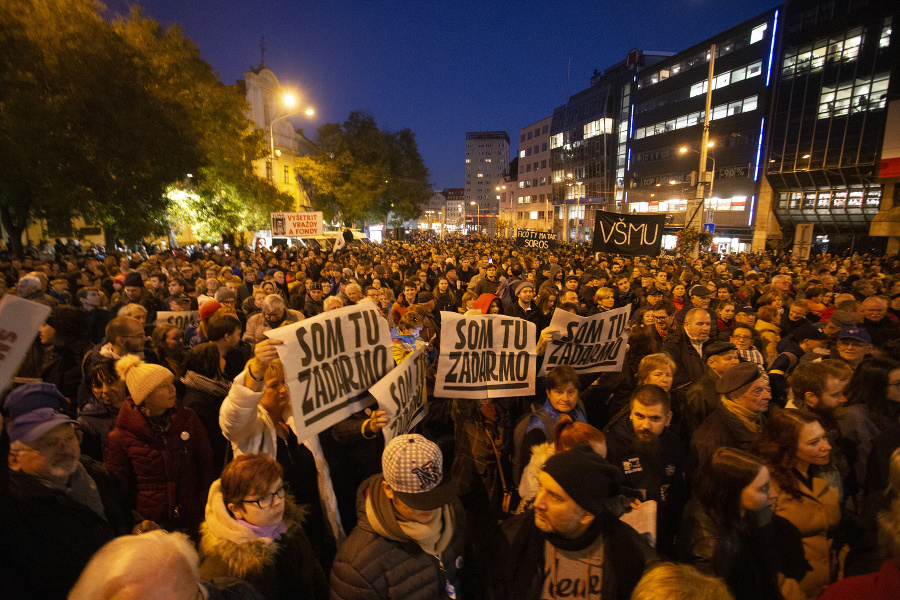 19:45 Thank you for seeing the situation in Slovak squares in relation to the protests for a decent Slovakia.

19:35 The protest was finished by its organizers already in Košice. The crowd sang the hymn and resolved calmly.

7:30 PM In Kosice, a member of the Citizens Forum, Daniel Liška, appeared. "There is a ghost in Slovakia." The crowd screamed spontaneously "Robert Fico".

19:20 The leaders of the 1989 students on the occasion of the Assembly issued a statement stating that they had been taken out of the streets for years with the arrogance of state power, immunity from law and violence against young people. "Today we are here again and we are here in the name of the defense of the freedom and the constitution of the rights guaranteed of us and our children". They reported. As well as the initiative of decent societies, they say in their opinion that Slovakia is a member of the civilization of the European Union, the values ​​of law enforcement, democracy, human and civil rights. "We want to live in a state where it does not manipulate the truth and do not abuse state power for personal benefit. We want to live in a country where citizens' initiative is valued and solutions are found to bring benefits to society."

19:03 The Slovak anthem is singing in Bratislava Square.

18:55 "They are hitting their canes in hockey shirts, millions of people have free trains, I think they need to deal with exactly when to go to the hospital, but we do not know what next year." Slovakians learn more about glory than about modern history, some hospitals seem like war, trees in the national park and the freeway we can not get for forty years, and we still hear that there is no alternative to this, and the alternative is that Slovakia does not It is a black hole, but has lost opportunities and possibilities. announced the president of the public RTVS Martin Strižinec.

18:50 In Bratislava, thousands of people protest. The SNP square is full of the old market.

18:50 According to Hungarian activist Miklós Haraszti, who spoke in the capital, it is not good news that, even after 30 years after 1989, central Europeans should once again demand democracy.

18:47 "What's the difference between the bass in Leopoldo and the Bonaparte apartment complex? Not one of them can go" took off in Košice

18:44 In Bratislava, actress Kristína Tormová. "I was standing at 89, I was a terrible winter and I was scratching the keys, it was still small, but I knew it was very important, our watch and our presence can change things, then we go back and let it happen."

18:42 The protest organizers in Bratislava are asking for the resignation of Prime Minister of the Slovak Republic, Andreja Danka.

18:41 The protesters in Banská Bystrica came to the place to say they did not want to live in a country where a journalist is killed, where he steals, where titles for the described work are obtained, where electoral systems change after the election. "We need to show that the government is not yet reliable. The current situation with the questioning of activists is a great exclamation point for all of Slovakia, especially since it is on the eve of November 17, when we gain some freedom and freedom of expression." said the organizer of the protest in Banská Bystrica the coordinator of the platform No in our city Martina Strmeňová.

18:38 Hundreds of Banskobystrians met today at 5:00 PM on the Liberty Square with the banners "Banská Bystrica is for the decent Slovakia," "I am free for you" or "Plagiarist's Resignation." The keys and the song of the "Facts Happened" passwords, "You're Understripping You", "The End of the Thief" and others were accompanied by a peaceful march next to the SNP Memorial for the SNP Square, while other protesters were added Finally, about a thousand people met in the square, adding the call to the initiative "I am Slovakia."

18:37 In Bratislava, in the square, the band called Sendrei.

18:35 The participants of the Assembly for a decent Slovakia in Bratislava do not want a coup, but their turnover. He declared it at the meeting of the sociologist Martin Bútora. "It's a return to a fair and solid society."

18:28 Pastirčák in Košice mentions a meeting with Fico years ago when he still defended the death penalty. "I had the feeling that it was more dangerous than Meciar at that time and it is crazy to attack journalists after the murder of journalists."

18:20 The organizer of the Kosovo protest, Ján Gálik, thanks to those who have been in the place 29 years ago and gives the floor to Daniel Pastirčák of the Citizens' Forum. "I learned to live in Kosice freely, the band was interviewed since 1977."

18:14 There is a great winter in Košice, so people offer mint tea.

18:13 The protest began in Košice, where about five hundred people gathered in the square. At the beginning a minute of silence was carried out for Ján and Martin. The poet Košický Martin Straka with a poem that composed on a murdered couple.

18:01 The organizer Karolina Farska urges President Kiska to do everything that is within his reach so as not to follow the example of Hungary. "Finally, send Fic e Kaliňák to political oblivion." of Juraj Šelig.

17:58 "I go down, low!" The crowd disappears and the song Prayer for Martha begins to sound.

17:55 "Walk to you like an egg longing, go to hell!" These words end Stanka's speech with the crowd.

17:51 "Mr. Fico, Danko and others like you, are going now, please, leave their hands dirty to these guys and we were also engaged in November 89. It is the same as today, only the imperialists have replaced the delusions of Soros. a compass and justice: all his band, who still talks aloud about the "coalition." Prime Minister Pellegrini, where is he sleeping? " currently actor Richard Stanke.

17:48 In the center of Bratislava there is an estimated 10 thousand people.

17:46 Now the speech of the tribe of actress Táňa Pauhofová. "We are non-violent and, in the future of Slovakia, we are, of course, the opposite of you, received the trust you betrayed, but we have voice and in a decent society, it is natural that the voice says that those who are in power are going in the opposite direction, as it is beneficial for society, we will not play the game of good and evil. "

17:43 There is a clear smoke and shame of the crowd. In a decent company, people like Danko would have to give up the organizers of the march. "But we still do not live in a decent society." said Fedor Gál.

17:38 "We will only win when the corrupt power of today is destroyed, and this process has already begun with municipal elections and will produce parliamentary elections." comes from the square

5:30 PM "We have people of different beliefs, opinions, different orientations, voters of different parts, but there is more that connects us to divide us" from the mouth of the organizers.

17:27 Some participants make banners such as "Stop Direction and Mafia", "I & # 39; m Free", "Stop Fico" or "Investigation of Assassins and Funds." Protesters are several groups of people, including retirees or families with small children.

17:23 Key squares, exactly as they did in 1989 during the Problem Revolution.

17:15 The SNP place in Bratislava is full of protesters asking for a more decent Slovakia.

Prievidza left today to request a more decent place in Slovakia at 4:11 p.m. At 17 hours, people gathered in the districts of Bratislava, Banská Bystrica, Levice, Žiari nad Hronom and Žilina. According to Facebook, about 13,000 people are interested in the protest in Bratislava.

The sixth night is added to Košice. An hour after Kežmarok. The protests will also be held in London and Dublin.

Slovakians return to the streets again: Number of places where people will protest Decent Slovakia, grows

Organizers Juraj Šelig and Karolina Farska for the initiative of Slovakia declared that protests today are due to an anonymous and false criminal announcement that organized a coup d'état and George Soros. "We will take the opportunity to show jointly the power of the government and its politicians that we do not want to live in a country where journalists are being killed by STB practices and, in addition to monitoring, journalists and activists are summoned to be intimidated" Activists call this "We do not want to live in a state where the truth is manipulated."