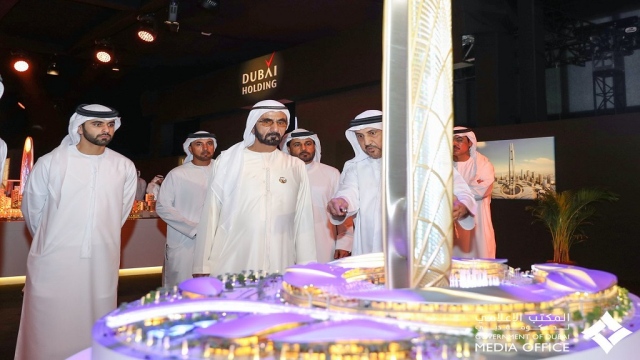 Vice President of the UAE, Prime Minister and Governor of Dubai. Your Height. Sheikh Mohammed bin Rashid Al Maktoum has launched a new milestone in the urban and cultural landscape of Dubai and a new tourist destination in the heart of Jumeirah. First

HH Sheikh Mansour bin Mohammed bin Rashid Al Maktoum, president of Dubai Holding and Mr. Abdullah Al-Habbai, who informed him about the details of the master plan for the project implemented by the Dubai Holding Group.

He explained the design and the components of the tower, which will ascend to 550 meters and consists of two parts linked by an ample platform of glass with a unique panoramic view, taking into account the design of the upper part of the tower suitable for hosting events.

The explanation will explain the different elements that will be included in the tower environment, including the large areas dedicated to the establishment of celebrations and events and events, multiple social, cultural, artistic and sports, considering that the region offers many family recreation options.

His Highness praised the new project that is added to the tourist facilities of Dubai and establishes its position in the international tourist map and improves its competitiveness among the best cities in the world.

The Jumeirah Tower is strategically located within the center of Jumeirah, opposite Sheikh Zayed Road in the Al Sufouh area, which boasts the most prominent facades of Dubai such as Burj Al Arab Jumeirah.

"We learned from his Highness Sheikh Mohammed bin Rashid Al Maktoum to continue to innovate and think beyond the traditional frameworks and strive to keep Dubai ahead and continue its success in development," said Abdullah Al-Habai, president of Dubai Holding. "We are honored to launch a project that is a tribute to HH Sheikh Zayed Bin Zayed Al Nahyan, Chairman of the Board of Directors of HH Sheikh Zayed Road.

"The launch of Jumeirah Tower today underlines the success of our strategy in Dubai Holding to implement sustainable and smart projects with great economic and tourism value for Dubai in line with the long-term development plans of Dubai," he said. Implementation of the first phase of the project in 2023 ".

The Jumeirah Tower will be one of the most distinctive architectural features in terms of design, inspired by the waves of hills and desert oases and inspired by its design and modernity. This tower is unique to any design of the emirate. Various heights and trends, and the highest international safety standards with hospitality and entertainment options.

The glass display platform that connects the two towers will provide a unique panoramic view of Dubai and the Gulf of Arabia and will be equipped with the latest technologies to improve the visitors' experience.

The platform is expected to become an important place for pyrotechnics and various events that adorn the emirate's sky during the various events organized by Dubai throughout the year. While the digital screens that cover the tower length from the outside will provide entertainment content to celebrate local, regional and global events that can be seen from long distances.

At the base of the tower and its surroundings, large areas will be available to house the general public and ensure an interactive and distinctive environment for visitors. The region will also offer many options for retail stores, restaurants and cinemas along the perimeter of the tower.

The tower is located in a new dynamic area, the Downtown Jumeirah, which has an important space in the heart of what is known in the new city of Dubai. Through its development plan, Dubai Holding intends to transform it into an active area based on an infrastructure that adopts the latest technologies of sustainability and intelligent technology to become the new center of the city. Thanks to its unique concept, attractive facilities and rich facilities to attract tourists and neighbors and revitalize the commercial and tourist traffic in the Downtown Jumeirah area with ease of navigation and modern and modern transport links that unite the Jumeirah region.