Five men, from 19 to 55 years of age, stopped the video of the efigium of Grenfell Tower "sick" when the journalist arrested the crowd 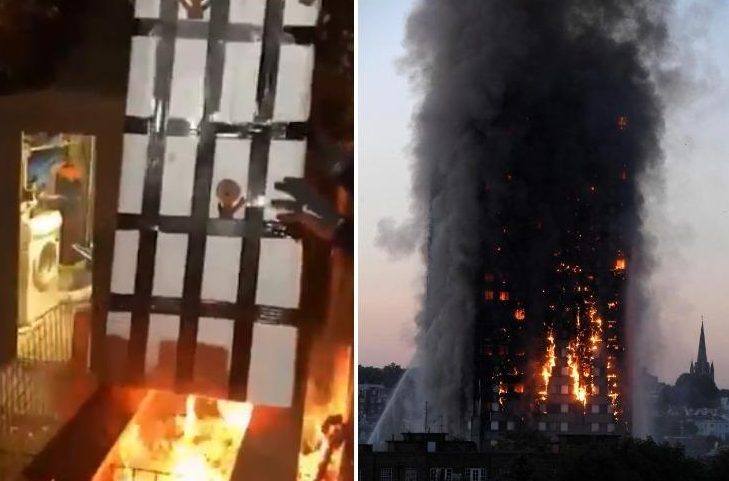 A hundred men were detained by the efigie video of the Grenfell Tower, ill, while the deformed crowd was trapped by the survivors and the prime minister.

Men 19, 46, 55, and 49 years old were arrested after being delivered to a south London police station at 10 in the morning on Monday.

The police in charge of investigating the hell that claimed 71 lives called the video "vil" and "calloso".

The police have already launched an investigation into crime against the shocking scene.

Show us the furious bullfighter while burning a cardboard structure with the Grenfell Tower written on the side – before singing "stay in his apartment" while on fire.

To PM Theresa May she tweeted: "Not respecting those who lost their lives at Grenfell Tower, as well as their families and loved ones, is completely unacceptable."

Survivor Rita Tankarian, 66, who escaped from the 17th floor of the burned tower, said the video had "horrible memories."

She told The Sun: "I do not know how people can laugh and make fun of this tragedy.

"I would like to ask: why did you do it?

"I would like them to be more sensitive, but I do not understand how they can do what they did.

"What's worse is that they seem to dedicate a lot of time and effort and never stopped to think how it would affect people who suffered through it.

"He has recovered some horrible memories, he is really disgusting."

IT Police Commander Stuart Cundy, who is leading the fire investigation, said he was "frankly terrified by the nature of the video" in a statement.

He said: "Simulate that the disaster so cruel is vile. I can not imagine the anguish that this video will undoubtedly cause families and survivors to be afflicted."

He continued to reiterate that serious research was being undertaken to trap those responsible.

During the video viewers they can be heard singing mockingly "help me, help me", since the tower, with cutouts of residents who try to escape, is taken to the bonfire.

Commander Stuart Cundy, who leads the investigation into the Grenfell Tower fire, released the following statement about the video circulating in social networks today pic.twitter.com/ep6MgAoKXt

In the video you can hear a woman listening: "Everyone, goodbye!" as the replica calls fire.

In a twisted reference to the London Fire Service "Stay-Put" deadly council, one can hear a man: "Stay in your apartment we are about to arrive," while another says to its neighbors that "jump through the window."

Another joked: "This is what happens when they do not pay rent"

The footage was uploaded to Twitter by Kay Oldroyd – who reported to the Met police as a crime of hate.

She said: "I want these beasts to be prosecuted. Flying the English flag and enjoying an old laughter at the expense of 100 years of lives that died more horribly.

"This is the sick mentality of racist and intolerant individuals. As much as I hate to share this video, I want you to identify them."

She said: "For once in my life I am speechless. I can not imagine what would happen to anyone so they could think it was fun, I really can not.

"Given the comments they made when they were seeing these burns burned down, I think it's a crime of hate. Let the criminal justice system take its toll.

"Apart from anything else, part of that process should be to get these people to sit in a room and listen to the testimonies of the people who were in the tower in the public consultation.

"I can not imagine anyone with humanity who would find this grace.

"I will be putting pressure on the police to take action as quickly as possible. These people will find and if anyone knows who they are then, please inform them."

The Grenfell Tower fire exploded in June 2017 on a block of 24-story flats in North Kensington, west London.

If it was thought that at least 350 people were inside when the fire started and some were still trapped hours later.

Khadijah Mamudu, whose younger mother and brother escaped from the fire, said that he was haunted by the "vile act."

She said: "I do not really know what to say, for once I'm honestly lost by words.

Muller broke the dance in the ambulance after England won

"The community is stronger together and even this vile act by flags, intellectually challenged, brain-washed sheep will not derail the fight for justice and will not call us our passion as we walk forward, with dignity and unity, in solidarity."

A spokeswoman for the Met Police said initially that they could not comment but no crime was committed.

The spokesman said: "Although the image is in bad taste it does not seem that a crime is committed".