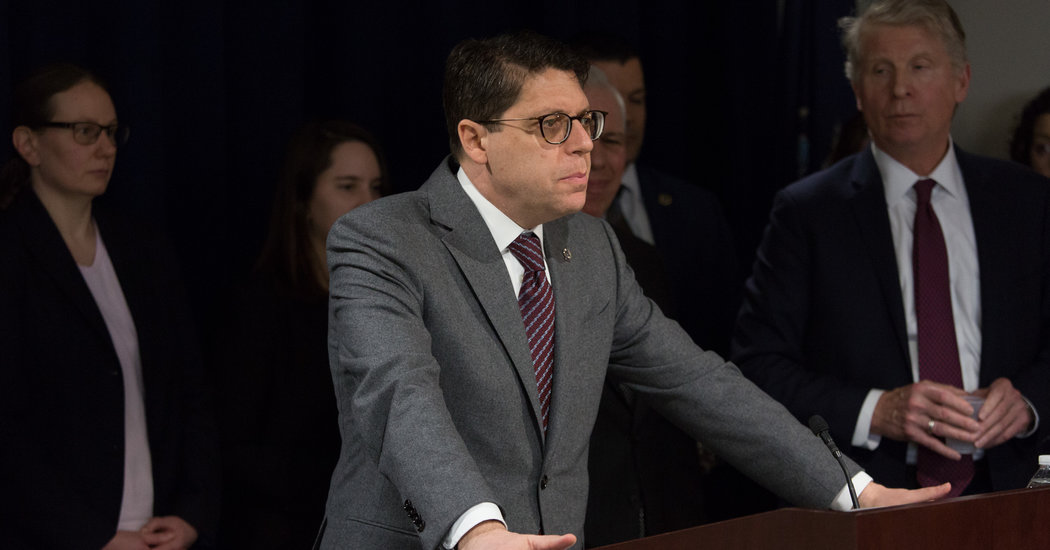 Mayor Bill de Blasio, on Friday, made the extraordinary step of expelling its investigation commissioner, Mark G. Peters, the culmination of a fierce rivalry between the two powerful men.

Mr. Peters was summoned to a meeting on Friday afternoon with Deputy Deputy Mayor Dean Fuleihan, and asked him to resign, according to the press secretary of the mayor, Eric F. Phillips. Mr. Peters refused, and Mr. Fuleihan told him he was being fired.

No mayor has removed a commissioner from investigations of his position in the recent memory; It is understood that the position has a high degree of independence that allows impartial control of all areas of government, including the executive.

But the relationship between Mr. Peters and the mayor has deteriorated severely over time and the last straw for the mayor was a report from an independent investigator who found that Mr. Peters had abused his power and mistreated subordinates and said he was "a horseman with the truth" .

Mr. de Blasio will appoint Margaret Garnett, the Attorney General of the State for criminal justice, to replace Mr. Peters. Your appointment must be approved by the City Council.

"It matters no more than integrity in the public service," said Mrs. Garnett in a statement. "As the commissioner of the Research Department, I will do my job to ensure that all those who work for the city of New York adhere to the highest level of ethics and deserve public trust."

Although the parties and the circumstances are different, Friday's action recalled the recent the shot of former prosecutor General Jeff Sessions, who was asked to file a resignation letter.

Mr Sessions has irritated President Trump for refusing to investigate the possible collusion of his presidential campaign with Russia. Mr. Peters annoyed the mayor with frequent investigations into government failures and errors.

The City Charter says that the mayor has the power to withdraw the investigation commissioner, provided he realizes the reasons for the shot and allows the commissioner "an opportunity to make a public explanation."

The mayor prepared a written statement citing the conclusions of the independent investigator, including the fact that Mr. Peters addressed himself "in a way that indicated the lack of concern to follow the law," he made "deliberately deceptive statements" in testimony before the City Council, and committed itself to "intimidating and abusive behavior".

He said the elimination of Mr. Peters would enter into force after three business days, a period that apparently aims to allow Mr. Peters to make public the explanation mentioned in the City Charter.

Mr. Peters fell a lot and hard. A long friend and political partner of the mayor, he was the treasurer of the mayor's campaign of Mr. Blasio in 2013. When Mr de Blasio, after assuming the position, appointed commissioner of the Research Department, the choice was received with skepticism, and the critics asked if someone close to the mayor would be sufficiently independent to investigate the administration.

Mr. Peters finally calmed the critics, issuing reports that affected city flaws to properly inspect contamination by lead paint on the flats of the New York City Housing Authority and lifting restrictions on writing in a Lower East Side home that allowed the installation to be sold to a luxury developer.

The reports exposed to shameful falls in the City Hall and the agencies that inform the mayor, and Mr. de Blasio often had problems with the conclusions.

The mayor was clearly slaughtered under the microscope of Mr. Peters and had considered firing Mr. Peters seven months ago but he decided against it; The city officials seemed unhappy about the possible reaction to shoot a researcher who had made a critical look at the mayor's government.

But Mr. Peters finally overtaken: Earlier this year, he made a takeover of an independent office that conducts research on the school system. When the head of the office, Anastasia C. Coleman, resisted the decision-making, Mr. Peters fired her.

She then filed a whistleblower complaint, which led to the appointment of an independent investigator: James G. McGovern, former federal prosecutor. The report gave the mayor impulse and evidence to force Mr. Peters.

The City Council was a strong ally of Mr. Peters in their confrontations with the mayor, especially under the current speaker of the Council, Corey Johnson. But the complainant's report largely undermined that support, including allegations that Mr. Peters misled the Council.

Mr. Johnson provided a statement on Friday demonstrating the extent to which that relationship deteriorated. Mr. Johnson has credited Mr. Peters explained why he had "major problems" in the housing authority and other agencies, but said that "the McGovern report has asked questions about its ability to continue in its role."

Mr. Johnson added that the Council "would imply a process of counseling and consent", an apparent reference to his role in the approval of a new commissioner.

But the chairman of the Council's oversight and investigation committee, Ritchie Torres, praised Mr. Peters for his independence and characterized his unprecedented shot, adding that he was "in disagreement."

Mr. de Blasio, in a statement released after his dismissal, thanked Mr. Peters for his service, but saved his praise by Ms. Garnett.

"Margaret spent decades protecting the public's interest, prosecuting criminals both inside and outside the government," he said. "She is fiercely devoted to defending what is right and will bring that independence and integrity to the Research Department. I am grateful to Mark Peters for his service and we look forward to the Council's consideration for the appointment of Mrs. Garnett."