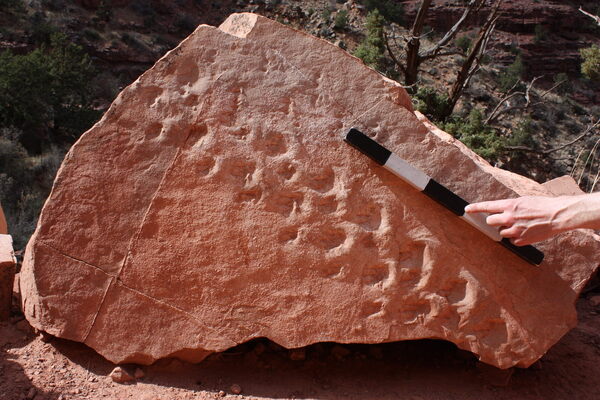 Eons back, somewhere in the Earth, a prehistoric creature like a lizard crossed a wetland dune next to a small continental sea. About 310 million years later, a photo of the fossilized lizard steps was at the paleontologist of the Steve Rowland table in Nevada.

The steps were preserved on a piece of sandstone along the southern edge of the Grand Canyon. In the spring of 2016, a colleague from Rowland 's was walking through the Bright Angel Trail when he saw a rock along the way with 28 strange bleeds in it. He gave his friend a call.

"I have a kind of network of hikers and geological companions who know what interests me," says Rowland, who works at the University of Nevada, in Las Vegas. In this case, Rowland's interest is the fossilized steps, also known as "scratches": the preserved memory of animal movements throughout the territory. "It is a sequence of unlikely events that have happened to preserve this particular animal in a day under fair conditions," says Rowland.

It is thus spoken: an animal walks on a wet sand dune, the dry sand fill the meshes, millions of years of geological forces transform the sand into rock, the continents change, the forms of the Grand Canyon, a rock falls from a cliff and roots They open in just the right path next to one of America's most popular hiking trails, a paleontologist goes on to notice and calls Rowland.

After examining the fossil, Rowland was surprised to discover that he was looking at the oldest vertebrate fossil found in the Grand Canyon. The thin, thin fingers with small claws suggested that the blankets were left by a reptile, which was also unexpected.

"I do not know I was a reptile, but I think it was," says Rowland. He says that if he is right, this could be one of the oldest records of reptiles in the world. This fossil is from a time when Pangea, the supercontinent, was forming more than 60 million years before the first dinosaurs. "The reptiles were the first to evolve and appear on Earth," says Roland. "Probably not much older reptiles than this one."

Another strange detail on the tracks: They are diagonals. When Rowland first saw, he thought it could be two animals walking together, but that does not make sense. "I did not expect lizard animals to walk in the open," he says. He strengthened the steps to determine that the animal walked at an angle of 40 degrees, walking to the right although it was moving forward. "It was kind of a side slip, like some kind of line dance was done," says Rowland.

There is no obvious reason for the ways with the sides, says Rowland. Perhaps the animal was being blown by the wind or sliding down a steep incline. Maybe it was a kind of dance movement to intimidate a predator or impress a partner. It is impossible to know.

This type of guesswork is exactly what paleontologists do from the track. While many fossil specialists study bones or parts of the body to investigate anatomy, diet or evolutionary history, paleontologists such as Rowland study fossils, the animal remains left behind, are curious about how animals They move and interact with the landscape. "We are actually examining the behavior of the animal," he says. "We can see the evidence of an animal moving sideways, and you will never see it in the bone registry."

When studying these footprints, Rowland is forced to imagine the motivations of a creature whose 28 steps literally were to the test of time.

"There is an animal that lived 310 million years ago and left some traces," he says, "and I am the person who has the privilege and responsibility to study and try to interpret what they mean for the rest of the world."