Governor Murphy blames meteorologists, do not apologize for the nasty NJ reaction. 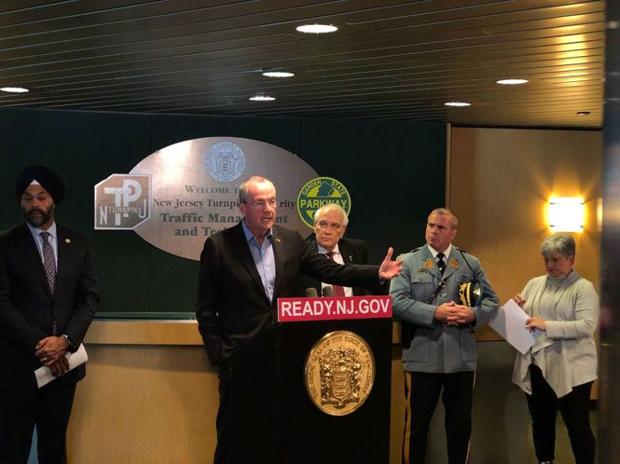 Governor Phil Murphy had a simple message to New Jersey on Friday morning after some parts of the state were paralyzed literally by a winter storm that turned the roads into parking lots.

"Clearly, we could have done better," Murphy said at a news conference to address the storm that cleared snow rises higher than expected in much of the state just in time for the night shift.

But there was no excuse for the governor, who instead made most of the blame for meteorologists who underestimated the force of the storm.

"Nobody realized the severity of what would come," said Murphy at a New Jersey Turnpike command center in Woodbridge.

Meteorologists in the morning were still predicting 4 to 6 inches of snow in most northern parts of the state, Murphy said. The models changed rapidly, however, without giving the State enough time for the team to finish the plow and salt.

There were about 1,800 teams on the way to New Jersey on Thursday, Murphy said. But many of these plows were seated in the same traffic that the travelers locked in because until then the faults already stopped the traffic in some highways of the state.

The excuse, however, came from the commissioner of the State Department of Transportation, Diane Gutierrez-Scaccetti.

"I offer our excuses to our New Jerseyans," he said. "Of course you are responsible for our performance."

Murphy, on his merit, told reporters that "at the end of the day … the dollar stops."

Murphy called the event "a perfect storm", saying that it was not anticipated that it was what it was and that "it changed and came to us" at the right time the schools left students and workers left their offices.

"The combination was lethal," said Murphy.

He added that his administration is "looking very hard in the mirror" and will perform a postmortem to investigate what went wrong.

The Republican legislators, on the other hand, launched themselves on the democratic governor.

"Governor, do not blame meteorologists," said senator Joseph Pennacchio, R-Morris, in a statement. "You have this one."

Even before Murphy took the microphone on Friday, the state assembly, Anthony Bucco, called for legislative hearings about the administration's response to the storm.

"Regardless of what resources have been deployed by the Department of Transportation, they do not seem to have a lot of difference in the state," said Bucco, R-Morris, in a letter addressed to the legislator who heads the transport committee of the Assembly.

"The state's response was miserable," said Bucco. "Only 14 kilometers from the house during my trip last night at route 287, the GPS told me it would take another hour and a half to arrive. I never saw a plow."

At least two fatal falls during the storm are being investigated as authorities related to the weather.

A 61-year-old woman died when her car was trapped on the clues of New Providence and was surprised by a NJ transit train. The city mayor said the car may have fallen on a hill covered with snow on the slopes.

A 52-year-old doctor died in Mantua Township when his car was hit by a truck. The authorities said the road conditions probably caused the failure.

Murphy spoke to reporters for a little more than half an hour before he cut the questions.

I have been covering NJ / NY in a capacity for 10 years and I can not remember an elected official who cut off a press conference (after a state emergency like this) until each member of the press with a question was an opportunity to ask. @GovMurphy @NJTVNews https://t.co/yfV2jSTlh4

"Covering NJ / NY in some capacity for 10 years and I can not remember an elected official who cut off a press conference (after a state emergency like this) until each member of the press with a question had the opportunity to ask him," he suggested Briana Vannozzi from NJTV.

The general of EE. UU. Phil Murphy addresses the state response this Friday to a snowstorm that paralyzed most of North Jersey on Thursday. Andrew Maclean | NJ Advance Media for NJ.com