Meet the Man Behind Lamar Jackson and the Ravens Quarterbacks 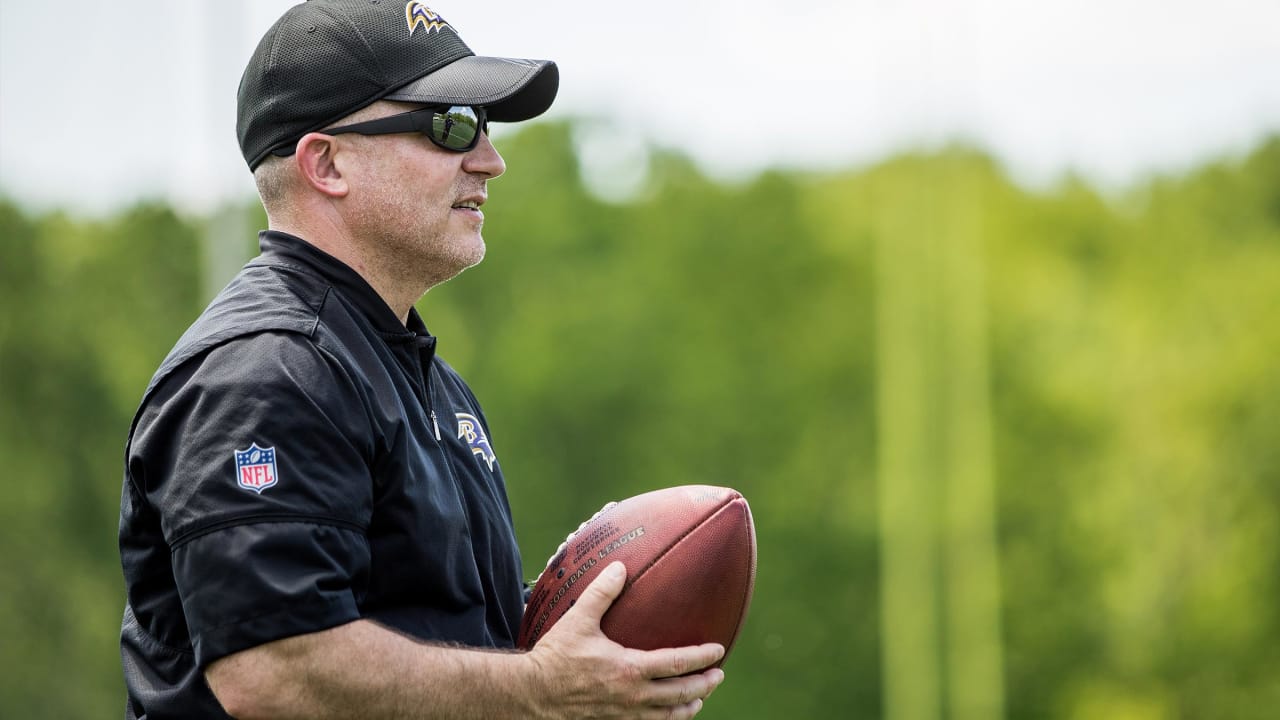 When Michael Vick resurrected his NFL career, going from federal prison in early 2009 to the Pro Bowl in 2010, Ravens Quarterbacks Coach James Urban played an important role. Long before his work with Joe Flacco, Lamar Jackson, and Robert Griffin III, Urban was the Philadelphia Eagles' quarterbacks coach (2009-10) when they made the controversial decision to sign Vick.

Many people believed Vick would never be an effective NFL quarterback again. Vick disagreed, and so did Urban. They spent long days watching film, doing drills, helping Vick rebuild his game after a two-year absence while serving his sentence for dogfighting. In 2010, Vick was the NFL's Comeback Player of the Year, with a career-high 100.4 quarterback rating.

Urban gained Vick's trust, as a coach deeply invested in the success of players.

"James' greatest quality was his ability to make you understand what a particular play was all about," said Vick, now an analyst for Fox Sports. "He did it with me, he did it with Donovan McNabb, he did it with Kevin Kolb. We had three quarterbacks with three different styles, but James was versatile enough to mesh with any quarterback. "

That's exactly what the Ravens need now, with the quarterback position in flow heading into the Sunday's game against the Cincinnati Bengals. Flacco's hip injury could keep him from playing.Jackson could make his much anticipated first start, but he missed practice Thursday (sickness) before returning to practice Friday. Robert Griffin III has been inactive the first nine games, but he was the only quarterback on the practice field Thursday.

It's ironic for Urban that the Bengals are Sunday's opponent, in a game that is critical for both teams. Urban spent seven seasons as the Bengals 'wide receivers coach before joining the Ravens' staff in January.

Working again with Ravens Head Coach John Harbaugh and Offensive Coordinator Marty Mornhinweg was too strong for Urban to resist. Harbaugh, Mornhinweg, and Urban worked together on Head Coach Andy Reid's staff in Philadelphia and became very close. Harbaugh's office was right next to Urban's.

"I got to see John every day as the best darn coach I've ever seen in my life coaching special teams," Urban said. "Marty's been a huge factor in my career. I give him all the credit for coaching the quarterbacks. We've had many many long conversations. Marty knows quarterback play as well as any coach I've ever been around. "

To say the Ravens' quarterback position is under the microscope this week would be an understatement. But as the team's quarterbacks coach, Urban's job is to help whoever plays Sunday be the best version of themselves.

Even in a chaotic week like this, Urban loves his job.

"It's invigorating," Urban said last week, before Flacco's injury and Jackson's illness became public. "I do not ever feel like I'm going to work. I feel like I'm doing to do what I love to do – be a football coach.

"Everywhere, every situation, it's the same with the quarterbacks. Too much credit when it's going well, too much blame when it's not. It's as much pressure as you allow it to be. Do your job Prepare Play the game that you love playing. "

Urban's hands-on work with the quarterbacks will get more attention Sunday if Jackson or Griffin start. Flacco has 11 years of NFL experience to lean on, but Jackson would be a rookie making his debut as a starter.

If Jackson starts Sunday, Vick thinks Urban and could be a valuable resource.

"I have a lot of experience working with mobile quarterbacks like myself and Donovan, which makes it easier for him to relate to Lamar on so many levels," Vick said. "He knows what you can and can not get away with at the quarterback position. I'm sure he's had the movie showing things Donovan and I did that either worked or did not work. "

Griffin has not taken a snap in a regular-season game since 2016, but said his comfort level with Urban was superb. Urban was credited by Griffin for helping him play well during the preseason to earn a roster spot after being out of the NFL in 2017. Griffin completed 65.9 percent of his passes during the preseason.

"Without comparing him to other people, Urbs' strength is allowing the quarterback to play free," Griffin said. "You always want to play within the system. But he does not make you feel like you have to be a robot.

"We're all here because we played at a high level throughout our lives. He does not want to take that away from you. You never want to lose your instincts. You can not coach instincts, but you can coach instincts out of player. He does not do that. I've played some of my best ball in a while because of his tutelage, allowing me to trust my instincts. "

Urban was already excited to work with Flacco, but when the Ravens drafted Jackson and signed Griffin, it created a similar situation to Philadelphia, coaching quarterbacks with contrasting styles. Jackson's development is crucial for the Ravens beyond Sunday or this season. The Ravens made a first-round investment in Jackson because they believe he has the talent to be a successful start quarterback. Urban's job is to help Jackson reach his full potential, and it's a daily process that the Ravens have mapped out carefully, including many after-practice throwing seasons with Urban.

"We had a plan all the time," Urban said. "Marty and I discussed that. We kind of stick to the plan. The only reps that Robert or Lamar really get are on the scout team. So then, how do we work, other than the individual time we have before practice? Well, we get to work on the net after practice. It's fundamental. It's drops over and over, it's passing fundamentals, and it is just really working on honing the skills of being an NFL passer. "

That is the greatest question mark with Jackson, his ability to become a consistent passer from the pocket, to make plays with his arm, not his legs. Urban believes that it will happen for Jackson, as it happened for Vick.

"At some point, to play in this league – great natural ability and running and all this – you have to be able to drop back and throw it," Urban said. "That's why we do all the stuff that we do.

Griffin has also tried to help Jackson, despite the competition for playing time. I can relate to Jackson like few other quarterbacks. Both are former Heisman Trophy winners, both are first-round draft picks, both are mobile quarterbacks, both entered the NFL with people saying their style playing might have to change to be successful. Griffin likes Jackson's willingness to listen.

"It's important to have the right quarterback coach, the right offensive coordinator, and the right quarterbacks in the room with you," Griffin said. "Lamar has the best of everything. Joe, a quarterback who's been in the league for a decade, won a Super Bowl, played big-time games, and does it differently than Lamar. I think it's great for Lamar to see that.

"Then he sees me. Everyone wants to say we're the same, but we're not. He's a way more dynamic runner than I was. The threat of running me was great, but I went through things, whether it was injuries or decisions, that being around me will help him avoid. You do not have to slide after five yards when you could have got 15. But slide after 15 yards instead of getting hit trying to get 18. "

One day Urban wants Jackson, Flacco, and Griffin to remember him the way Vick does, as a quarterbacks coach who helped them become better. But for now, Urban wants the Ravens to win, and he believes in the three quarterbacks.

"They're probably more similar than you'd imagine, super-competitive in different ways," Urban said. "Family and football, that's about the world in which they live.