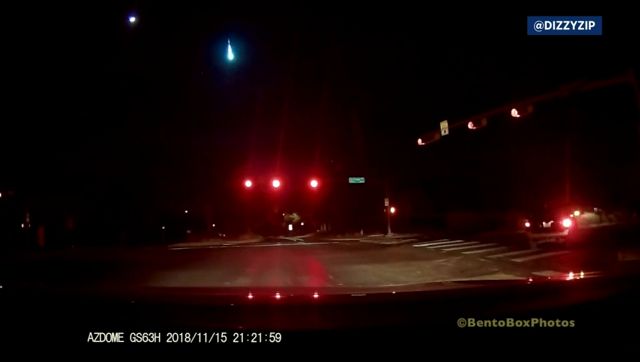 TEXAS – Reports of "shooting stars" abound, and it's no surprise as the annual Leonid meteor shower ramps up to peak this weekend.

At least one particular loud meteor apparently fizzled over the skies of Austin Thursday night, and there could have been as many as three spotted in the past 24 hours over the Lone Star State.

At about 9:22 p.m. On Thursday, Southwest Austin Elizabeth Stone's resident says she was facing south at an intersection in the Circle C neighborhood when, suddenly, a bright meteor streaked overhead.

As luck would have it, her dash cam captured the very quick but spectacular event, as seen in the above video.

Residents around the area tell ours Chief Meteorologist Burton Fitzsimmons that they heard a loud boom that shook the windows.

According to Barb Camacho in Dripping Springs, "we thought it was an explosion. We went outside and saw the long trail left in the sky."

On Twitter, Amy Atchison-Fisher was "outside in Driftwood and heard what sounded like one lone firework being shot off."

Earlier on Thursday evening, viewer Genny Skrobanek says she saw a meteor in the skies over San Antonio that "it was a beautiful green color." It reportedly happened around 6: 50-6: 55 p.m.

Then our own Spectrum News anchor Alex Stockwell reported seeing another meteor flying through the skies while she was driving to work around 3 a.m.

Astronomers call for 10 to 20 meteors per hour at the peak, which happens Saturday night through Sunday morning.

The Leonid meteor shower originates from debris from the Temple-Tuttle comet, which travels through our solar system every 33 years. Leftover particles the size of a grain of sand burn up as they travel around 100,000 to 160,000 mph in Earth's atmosphere.

If you see or hear evidence of a meteor, please be sure to let us know!