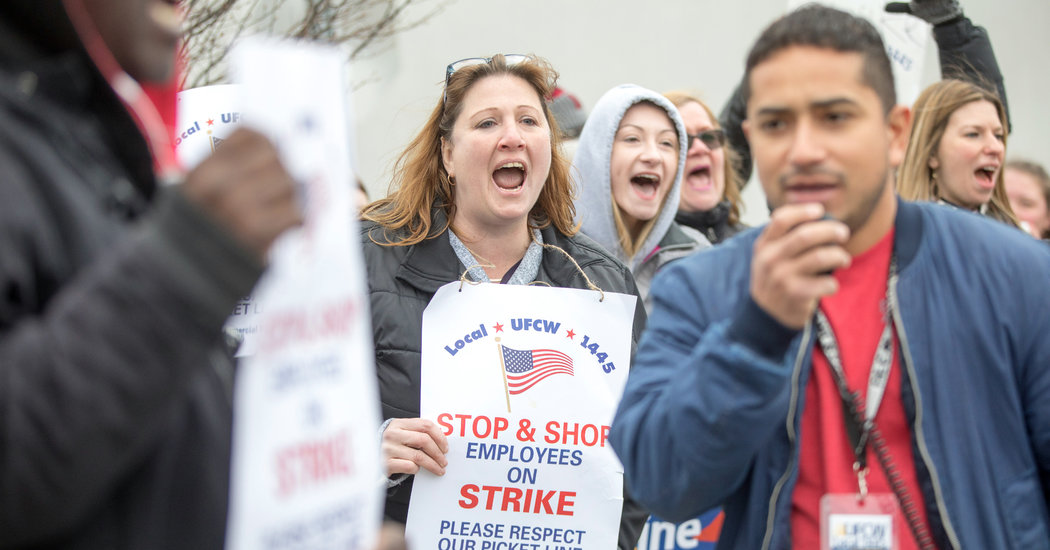 The president of Stop & Shop, Mark McGowan, said in a statement on Saturday that the contract the union had proposed was "unsustainable" and could lead to higher prices for consumers.

Thomas Kochan, director of the M.I. Sloan Institute for Work and Employment Research, which focuses on addressing the needs of a modernizing work force, said Stop & Shop did not have to raise prices to provide higher wages.

"It is not automatic that it has to go into price increases," he said. "They have to find ways to have better customer service to attract more customers."

The way the strike was unfolding was par for the course, he said.

"They are a unionized and an older company that does not have a strong reputation for great customer service," he said, adding that the supermarket chain has to remain competitive to provide higher wages.

At a Stop & Shop in Main Street in Bridgeport, Conn., Lisa Juliano, a florist manager who has worked at the store for two years, said she was particularly worried about the loss of premium pay for working Sundays.

Though she said the company was not directly proposing a reduction in the Sunday pay for current employees, it does want to eliminate the premium for new hires. Many employees expect the new employees would then be asked to work most Sundays, resulting in a de facto pay cut for the more tenured workers.

"The extra Sunday pay makes up what I live on day to day," Ms. Juliano said. "If not for the extra I get on Sundays, I would not have gas to come to work the rest of the week."

She said it was important for current workers to fight for the benefits of future ones. Her father was hired by Stop & Shop more than 30 years ago, to push shopping carts, and he is now a grocery manager, she said.