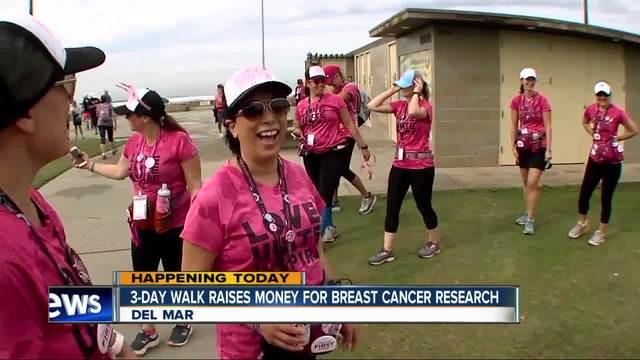 The event is one of the seven scheduled by the non-profit organization this year and one of the two on the west coast. Each year, participants in the country undertake to raise a minimum of 2,300 dollars to support the efforts of the Komen organization and walk an average of 20 miles per day for three consecutive days, according to the foundation.

The walkers of this year began their trip in the fairground at 6:30 a.m. and will continue to the state of the Torrey Pines bridge, the La Jolla cove, Kellogg park and through Bird Rock before spending Friday night at Crown Point Shores in Mission Bay.

One of several animation stations will be created at the Taylor Branch Library in Pacific Beach along Cass Street from 12:15 to 4:40 p.m.

The route takes place on Sundays through the historic helmet, Mission Hills, Hillcrest and Balboa Park. The closing ceremony will take place on Sunday at 4:30 p.m. at Waterfront Park in downtown.