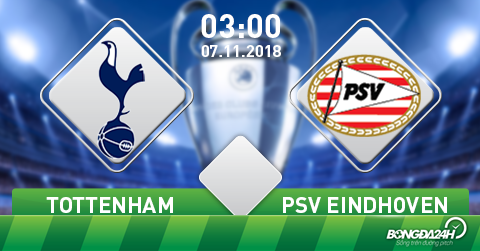 (press Ctrl + F5 to get the latest information)


Leaves of chance make Tottenham a difficult group in the 2018/19 Champions League, the Spurs are in Group B with Barça, Inter Milan and PSV. Pochettino played disappointment after the first three games, losing Inter, Barça and continues to disappoint when leaving the PSV 2-2. With only one point after three games, the representative of England is faced with the possibility of being eliminated from the group stage.

In the fourth game, Tottenham will continue to house PSV. Barça, with 9 points after three games, will surely keep the ticket to go, Spurs will have to compete with the remaining ticket with Inter Milan, the team is second with 6 points. Pochettino will be forced to defeat the PSV at home and wants Inter could not beat Barça to ignite the opportunity to go to the group stage. Certainly, the London team will do anything to win 3 points against representatives of the Netherlands.

With the determination to win three points, coach Pochettino launched a super-attacking team, the best attacking Spurs players from the beginning. Harry Kane plays in the center, behind him is the trio Son, Moura and Alli. Winks and Eriksen played midfielder in this game, the four defensive midfielder used by the Argentine guards, including Aurier, Alderweireld, Sánchez and Davies, in the Gazzaniga forest, the goalkeeper on the side of London. .

On the other hand, PSV is also in the strongest team, with the best stars of the team, including Zoet, Viergever, Luuk de Jong and Lozano. . The Netherlands team is also determined to surprise the team on the ground of London.

In the first minute, PSV suddenly opened the scoreboard. Pereiro throws a corner kick to Luuk de Jong to make a good header for the Dutchman. After the goal, Tottenham pushed the team to find the table. The pressure of choking was withdrawn in the field of visitors. In the 5th minute, Alli was in the spotlight, but Angelino cleared the ball. Two minutes later Eriksen shot a ball, the ball beating a player of PSV changed direction but the ball turned aside from the column.

Tottenham is in full control of the game, but is fighting against the local public, especially the Spurs should be careful about the team's counter speed. You can not get to the opponent, the home team started impatiently, the situation shoots a lot more begins to be done. With 21 minutes played, Harry Kane had a fantastic opportunity to reply but his shot flew harmlessly into the side-netting of the goal. Shortly after, Moura had the opportunity to break and faced the goalkeeper of the PSV, but failed to overtake Zoet in his situation.

28 minutes, Tottenham has a good chance of reaching the goal draw, but Eriksen can not overcome Zoet in a very close situation, the ball has left Dele Alli's position, but the player continued defeating Zoet in the face of the situation. The PSV goalkeeper had four great situations to save after only 30 minutes of shooting.

At 36 minutes, Dele Alli had an even more delightful opportunity but continued to fail with the PSV goalkeeper before the situation. With 4 minutes played, Eriksen's well-worked indirect free kick caused havoc in the penalty area, but the visitors' defense got the best of this rather direct style of play. Apparently Zoet is the brightest star in the game to date.

In the last minutes of the first half, Tottenham was very difficult to find the goal but failed. In the first 45 minutes, Spurs kept the ball 76%, ending 14 times, 6 strokes but failed to score. On the other side of the line, the PSV has just finished 2 times but has brought a goal again. The excellent goalkeeper Jeroen Zoet helped visitors to take before the break.

The local team advanced the squad to find the tie, 48 minutes Ben Davies shot the ball away from the post but the ball turned aside the goal of the PSV. Five minutes later, Alli made another shot but the ball overtook the goal of the visitor. Fighting attack, almost Tottenham had a second goal lost in the second minute, the angelic corner kick from the free kick, but Gazzaniga's goalkeeper grenade jumped into the defense.