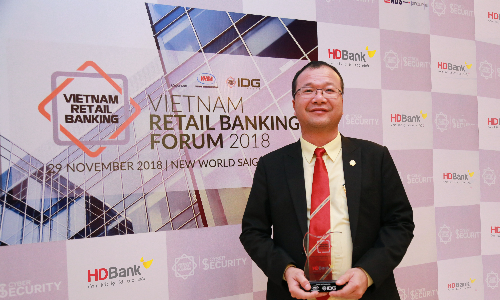 Recently, HDBank has been awarded the "Retail Bank of 2018" by the Vietnamese Bankers Association (VNBA) and the International Data Group (IDG).

"The award affirms the position and objective of HDBank in the leading banking strategy for SMEs – retailers and consumers," said the bank's representative.

In recent years, HDBank has had a strong vision development, strategy and management capability when it is a pioneer in the merger of DaiABank and buys 100% of the capital of the financial company SGVF Société Générale financière – France).

After 5 years, HD Saison has grown about 10 times, becoming one of the first three consumer financial companies, which operate effectively and have the largest network in Vietnam. After the merger of DaiABank, HDBank continued to have a high growth rate in the industry as it launched its innovation mission, providing products and services to millions of customers using eco-consumer – aviation – retail distribution … own bank.

In September, HDBank has 280 transaction points, more than 14,000 financial transactions across the country, establishing relationships with more than 400 major financial institutions in the world. HDBank is serving almost 5 million individual customers and hundreds of large, medium and small businesses in the market.

According to Tuan Anh, from 2017, HDBank has implemented a strong digital transformation strategy and continues to accelerate this process, updating key applications that automate operations, increase customer experience and increase competitiveness, with the goal of becoming a typical bank of retailers

"Typical Retail Bank in 2018" is the prize organized by VNBA and IDG, which is part of the Vietnam Retail Banking Forum series.

The prize is held annually from 2012 until now with the aim of finding and honoring the outstanding banking products and services with outstanding results, contributing to the financial sector in particular. , as well as society in general. In addition to helping banks recover their yield, considering the quality of their products and services during the year, the award also helps clients to insist on trading in reputable banks.

The "Highlights of the Retail Bank in 2018" has continued for many years as "The Best Bank of Caixa Management in 2018" in Asia Pacific Hosted by Euromoney; "Best Managed Company" in Asia for 2 years …

At 30/9, HDBank is one of the largest banks with total assets of almost 200 billion dong, a capital of almost 16 trillion dong. The bank continued to maintain its strong growth momentum with a pre-tax profit of 9,900 million VND in the first nine months of 2018, a 51% increase over the same period of 2017. With positive results, HDBank is expected to end up surpassing The objective of 3,933 million dollars of consolidated profit established earlier this year. Weak debt remains rigorously controlled.