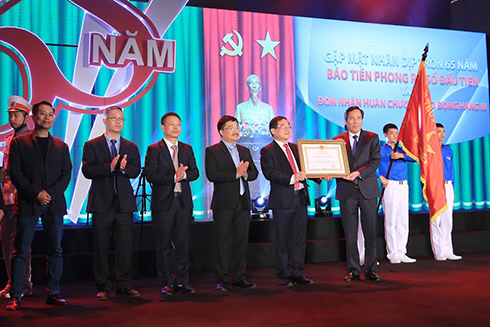 Secretary General Nguyen Phu Trong sent a letter to the Tien Phong newspaper, marking the 65th anniversary of the publication of the first issue

The Tien Phong newspaper issued its first issue on November 16, 1953 during the French Resistance War in the Viet Bac War Zone. Since then, the newspaper has accompanied young people and people in the fight for national liberation, the reunification of the Fatherland, the construction of socialism and the national renewal.

The Tien Phong newspaper is a dynamic newspaper that adheres to the political, creative and daring of the information, standing out in the most prestigious newspapers and readers received. The newspaper is also an excellent organizer of social activities, volunteering, culture and sports.

Thuan Huu, a member of the Central Committee of the Party, deputy director of the Central Propaganda and Training Commission, editor in Chief of the People's Newspaper, president of the Association of Journalists of Vietnam, presented the Nobel Prize for the Tien Phong newspaper

On this occasion, Secretary General Nguyen Phu Trong sent a letter to Tien Phong. The full text is as follows:

Letter from the Secretary General of the Central Committee of the Communist Party and the President of the State, Nguyen Phu Trong, sent to the Tien Phong newspaper 65 years ago Issue number

In the past 65 years, the newspaper Tien Phong – spokesman for the Ho Chi Minh Communist Youth League has been in a position of special importance in the revolutionary press system of Vietnam. In any stage of history, in the fight for national liberation or in the cause of national renewal and development, the newspaper has promoted its role as a pioneer, which is reflected in the struggle and construction. Build and guide the right ideology so that young people and people they solidify and serve the cause of the revolution.

In addition to actively participating in the propaganda of policies and policies of the Party and the State, the Tien Phong newspaper also participated actively in the reflection of the lively life of society, contributing to the discovery and multiplication. At the same time, it shows things that are not good or bad, errors in society, negative in life. The correct Party and State policy was spread quickly and vividly for young people. In this way the members, the young people actively engaged in the learning, the work mobilize and contribute great contributions to the cause of the construction and defense of the Mother country.

In recent years, our country has been increasingly reformed and has achieved many important achievements. It can be said that the country never had the strength and the state as it is today. However, apart from the achievements, the land faces difficulties and challenges. The degeneration of ideology, morale, lifestyles, "self-evolution", "self-control" in the contingent of cadres, members of the party, despite many changes are still complicated. Among young people, there is also a segment of young people who refuse their faith, fading the ideas of revolution, practical life away from the good cultural traditions of the nation; Even a small number of young people were influenced, dragged and incited by the evil and hostile forces that opposed nature and glorious traditions of the Union and unlike goals and ideals. the revolution of the Party and people …

Against this situation, more than ever, Tien Phong newspapers must promote the role of shock, they really deserve to be the central body, the voice of the Central Youth Union, the youth forum of Vietnam. The newspaper should further improve the propaganda and education of revolutionary ideals, ethics and cultural life for the new generation, thus helping to help the youth of Vietnam on the revolutionary path that the Party and the people selected; Each union member, the young people created the spirit of pioneering spirit, solidarity, creativity, deserving of being the trustworthy team of the Party, the revolutionary revolutionary army.

The newspapers must continue leading the fight with the bad ones, the negative ones; Strengthen the resistance to the negative, the negativity of opposing forces, Especially in social networks: "Avoid the pale game, Doan dry, away from politics."

In addition, the Tien Phong newspaper should promote team building, how to do the staff, journalists should be clean, firm professionals, experts in specialized expertise, have political stability, understand The status of the newspaper for young people – the future owners of the country – to fulfill the mission entrusted by the Youth Union and their confidence in the country.

I am sure that, with proud traditions and knowledge, the Tien Phong newspaper will continue to develop and will contribute more to the cause of national construction and defense.