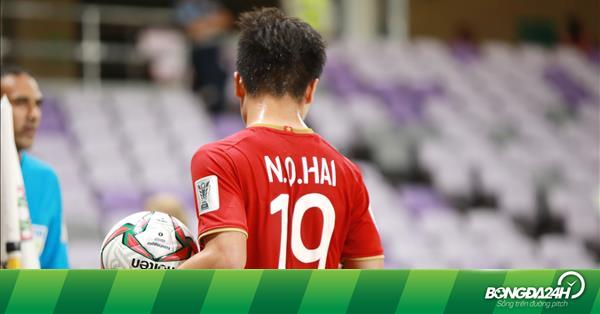 Sharing in the first training session preparing for the new season, midfielder Quang Hai wanted to go outside to play, after recent information.

After a year of 2018 playing with too much success and winning the title of Golden Ball, the native player of Dong Anh continued to have impressive performances in the Asian Cup. Returning to the Hanoi club to prepare for the 2019 V-League, Nguyen Quang Hai shared his goals.

He said: "I think I can go abroad to play, it's great for Vietnamese players. Certainly, if I had an offer, I would like to try my hand on the most advanced soccer history.
I think they are not only me, any player must play in a higher environment, determine where I am " – Quang Hai shared.

Previously, there was a lot of information that some of the J-League teams were prepared to question the best current player in Vietnam. There have been rumors of transfer of the League. If this happens, fans can watch Quang Hai play against … Messi.

Along with that, another Hanoi club name also received many transfer requests, namely, Doan Van Hau. Recently, the capital equipment denied the connection with Muangthong United (the new Dang Van Lam club), but said it would consider if there was any formal offer from any team.

After arriving in Hanoi, Bui Tien Dung received a salary greater than Quang Hai
According to the contract, the salary of goalkeeper Bui Tien Dung was determined, and this is not a small number.

Many Korean teams aspire to own the midfielder of Quang Hai
Recently, a journalist from Chosun, South Korea, has confirmed that Quang Hai midfielder is warned by many K-League teams after his impressive performance in the Asian Cup …