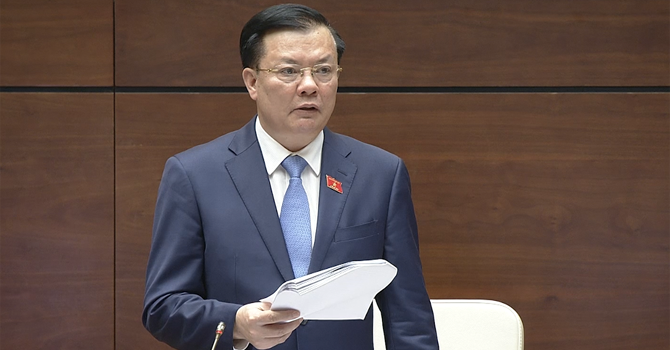 Discussion on the Tax Administration Law Project (revised) on November 15, Finance Minister Dinh Tien Dung said that when the State Audit Agency carried out the audit at the tax office, the comparison with the In addition, the increase in revenues for the budget and the data on risk analysis of the tax authorities.

"We basically agree. However, in the implementation process there are conclusions, the tax authorities act very seriously, they notify taxpayers that they pay more, but taxpayers who were not considered satisfactory should be sued. For the first time, the tax authority is the The person who makes the decision must be treated. They do not agree, they demand the highest level of tax administration is the Ministry of Treated Treated. If you do not attend, go to court. We suggest you, who concluded that you must be accountable to the courts, "Petition of Minister Dinh Tien Dung.

According to the Minister of Finance, this matter will continue to be reviewed and adopted in such a way that the law is complied with and complied with.

Debate with the Minister of Finance Dinh Tien Dung immediately after this statement, the Auditor General of the State, Ho Duc Phuc, said: "Recently, the minister said that because the auditors make a false tax comparison for taxpayers related to the tax authorities. I would like to confirm to the Minister that I was the General Auditor for almost 3 years, in no case, of the conclusions of the State Court to involve the tax office due to taxpayers. "

At the same time, Auditor General Duc Duc Phuc also stated that the tax authorities to flee, to raise revenue is very large. For example, the comparison of non-state companies in the last two years has lost 94% of the comparison.

"For any company," he said, "Unilever has only sued the Prime Minister and the Finance, Budgets and Returns Commission, now he has returned to verify and determine 584 million. They asked him to come forward but were not subject to fines, but if the matter was finalized or it was not decided by the General Tax Directorate, but we can not decide. "The General Auditor, Ho Duc Phuc, concluded the debate.

After the debate, on November 16, the General Directorate of Taxation (MOF) held a press conference, exchanging information on the draft Tax Administration Law (revised).

Regarding the results of the legal actions, the representatives of the General Directorate of Tributes said that there were six lawsuits in the province of Dak Lak who claimed the victory of the business because the court concluded that the tax authorities issued the decisions based on the recommendations of the audit and do not evaluate There is no legal basis for its implementation.

Among them, the case occurred in the Tax Office 3, in the city of Ho Chi Minh, according to Mr. Li, after the company's state audit proposed paying an additional tax of 60 million. The case was subsequently judged but was not dealt with until 2013.

"Basically in the course of the operational audit, the state audit has made a useful contribution, helping to levy taxes efficiently but there is still a heterogeneous application of the law, the point of view of treatment may vary. This leads to heterogeneous coordination," he said Li

Therefore, Mr Ly said that there is such an existence, so the draft wants to change the direction after the conclusion of the inspection and audit, the tax authorities will conduct the fiscal inspection before the decision to make it right.

"We are the decision makers to have a legal basis to guarantee the management of taxpayers, guarantee the correct implementation of tax law, avoid protracted complaints. We also want clarity," he said.

Mr Pham Ngoc Lai, acting Chief of the Department of Inspection, General Department of Taxes, stated that the fiscal branch always cooperated closely with the State Audit and the Government Inspection. When the Auditor of the State performs budget audits in a single location, there will be an audit team in the tax office. The Ministry of Finance and the Directorate General of Taxation issued documents to direct local tax departments to coordinate closely and facilitate records to audit agencies.

"However, at this time, the audit company determined that the company was wrong, so that some companies thought that their mistake was not very accurate," said Lai.

Regarding the "94% loss of taxes", Lai admitted that even when the tax authorities carried out inspections, they found a large error rate of 95-97% of the total number of units selected. Check

"However, the error rate also depends on the unit. The unit misses 500 thousand, one million is incorrect, up to a unit of great error, discovered almost 2,000 million. But with little misconduct, it is difficult to account for relative proportions. Meanwhile, our policy is not synchronized with concrete behaviors out of the reality, so that reality has to change constantly, "added Lai.