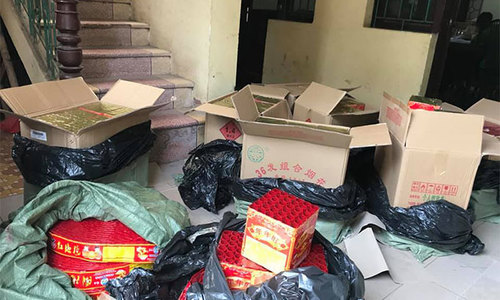 At 10 o'clock on November 16th, the patrol team of the team of control of the CSGT team n. 15, the Police Department of Hanoi is on patrol, the control of Vo Van Kiet – Vo Nguyen Giap (district of Soc Son), detection Taxis carrying Hanoi number plates of goods loaded in the car should signal to stop.

Throughout the inspection, the entire rear seat and the windshield were full of cardboard boxes with internal bags containing suspicious fireworks and fireworks.

Team No. 15 handed out material tests to the police station Kim Anh, Soc Son, to deal with the regulations.